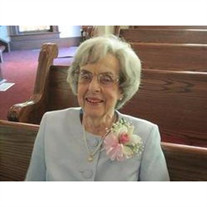 ALMA WRIGHT WILSON POLANDAlma Wright Wilson Poland was born on August 13, 1928 to the late Samford Taylor Wilson and Annie Odessa Johnson Wilson of Laurel, Mississippi.  At an early age, she joined The First Baptist Church in Laurel, and was an active member for many years.  After graduating from George S. Gardner High School in Laurel, she attended Baylor University in Waco, Texas, graduating in three years.  At Baylor, she was a member of Alpha Chi honorary scholastic fraternity.  She graduated in 1950 with a BA degree majoring in English.   On June 25, 1950, three weeks after graduating from Baylor University, she married Claude W. Poland, Jr. of Lula, Mississippi, where she lived for eighteen years while he was employed in a family owned bank.  She and her family were active members of the Lula Methodist Church, where she served as choir director.  She was a long-time member of the Coahoma Woman's Club.   In 1967, her husband accepted a position as manager of the Booneville, Mississippi branch of the Bank of Tupelo, now known as BancorpSouth.  He was subsequently transferred to the main office in Tupelo, Mississippi in 1971.  She and her family were active members of the First United Methodist Church of Booneville, where she was active in the Women's Division.  She was President of the Booneville Woman's Club.   After moving to Tupelo, she and her family were active members of the First United Methodist Church where she was a Stephen Minister visiting shut-ins for the church.  She was a member of the Wesley Sunday School class and of the Mary Ritchy Circle, as well as a member of the Congregational Care Committee. She also served at the Sanctuary Hospice House as a Thursday morning receptionist as long as heath permitted.     She taught 7th grade English in the Milam Middle School in Tupelo.  While teaching, she received a Master's Degree in Education from the University of Mississippi.     She loved beautiful flowers, and especially enjoyed her azaleas and daffodils which she hoped others would enjoy for years to come.  She was an avid reader and a member of the First United Methodist Book Group, and a long-time member of the Saturday Reading Club in Tupelo.  She also enjoyed handwork, especially samplers, and produced a number of them.   She and her husband celebrated their 60th wedding anniversary on June 25, 2010.     She was preceded in death by her husband, Claude William Poland, Jr.; her parents; and her only sister, Sarah Jo Wilson Dyess.  Her husband's sister, Eugenia Mothershed, passed away on January 2, 2016, one day after her passing.  She is survived by her three children:  Anne Ferrin Poland Simmons (John), William Brooks Poland (LaFonda), and David William Poland (Lee Ann); as well as her grandchildren:  John David Simmons, Neil Simmons, Brannon Poland, Anne Claire Poland Henson, and Laura Poland; three great-grandchildren, five nieces and nephews, and other family members.   Visitation will be on Thursday, January 7, 2016 at 10:00 a.m. at the First United Methodist Church in Tupelo, with the service to follow at 11:00.  Burial will be at the Barbee Cemetery in Lula, Mississippi.   In lieu of flowers, memorials may be made to the First United Methodist Church's Helping Hands Ministry at 412 West Main Street, Tupelo, Mississippi, 38801; or the Sanctuary Hospice House at 5159 West Main Street, Tupelo, Mississippi, 38801, or the United Methodist Senior Services' Meals on Wheels, 2800 West Main Street, Tupelo, Mississippi, 38801; or to the charity of your choice.Expressions of sympathy may be left at www.peguesfuneralhome.com

ALMA WRIGHT WILSON POLANDAlma Wright Wilson Poland was born on August 13, 1928 to the late Samford Taylor Wilson and Annie Odessa Johnson Wilson of Laurel, Mississippi.  At an early age, she joined The First Baptist Church in Laurel, and was... View Obituary & Service Information

The family of Wright Poland created this Life Tributes page to make it easy to share your memories.

Send flowers to the Poland family.