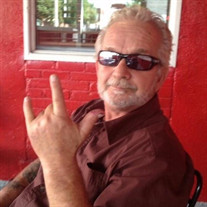 Plantersville--William James Willette was born October 11, 1954, in Amsterdam, New York, to Irma and Edward Willette. “Billy,” as he was affectionately known by his friends and family, passed away unexpectedly on March 27, 2022, at his home in Plantersville. He spent his childhood and most of his adult life in California, and then later relocated to Mississippi, where he lived for the next 22 years. Billy developed a reputation in Mississippi as a dependable, hard-working welder and metal fabricator, and was known for his outstanding work ethic. During this time, he created enduring friendships built on genuine loyalty and trust. Those who knew him will always remember his optimistic spirit and positive attitude. While in Mississippi, he met and married Lori Ramsey in 2012, who he loved fiercely and to whom he was devoted until her passing in December of 2013. Billy touched many lives with his kindness and his infectious sense of humor. Billy, you will be dearly missed. He was preceded in death by his father Edward Willette, mother Irma Reynolds, step-father Chuck Reynolds, brother, Timothy Willette, and wife Lori Willette. He is survived by his brother, Edward Willette; children Nicole Corbett (Leon), Tabitha Stevens (Craig), Kimmy Harris (Ricco), Billie Jean Willette, Mike Willette (Brittany), Tommy Willette, Dylan Willette; and Dylan’s mother, Linda Allen; step-children, Barton Ramsey (Bethany), and Annelisa Ramsey; 11 grandchildren, three step-grandchildren, and one great-granddaughter. Services honoring his life will be 3 p.m. Saturday, April 9, 2022, at the Jefferson Street Chapel of W. E. Pegues with Barton Ramsey officiating. Visitation will be 2 p.m. until service time Saturday, April 9, 2022, at W. E. Pegues, Tupelo. Expressions of sympathy and fond memories may be left at www.peguesfuneralhome.com.

Plantersville--William James Willette was born October 11, 1954, in Amsterdam, New York, to Irma and Edward Willette. &#8220;Billy,&#8221; as he was affectionately known by his friends and family, passed away unexpectedly on March 27, 2022,... View Obituary & Service Information

The family of William Willette created this Life Tributes page to make it easy to share your memories.

Send flowers to the Willette family.