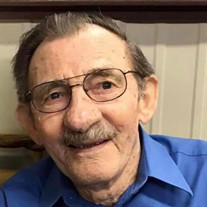 William Frank “Snap” Lucius, 84, died Thursday, December 10, 2020 at his residence. He was born in Calhoun County, May 12, 1936 to Wesley Wade “Pete” and Myrtie Lee Therrell Lucius. On December 24, 1955, he married Martha Jean Long. Early in life, he served his country in the Army National Guard. He later retired from Coca-Cola in Tupelo after a lengthy career as a route salesman. He loved to collect Coca-Cola memorabilia and enjoyed being outdoors, fishing and gardening. He was a charter member of Emmanuel Baptist Church where he served as a deacon. Survivors include his four children, Danny Lucius and his wife, Lisa of Randolph, Angela Sheffield and her husband, Mike, of Tupelo, Amanda Sanderford and her husband, Ricky, of Mooreville and Jeff Lucius and his wife, Julia, of Mooreville; nine grandchildren and ten great-grandchildren all who lovingly called him “Papaw Snap”; and a host of nieces and nephews. He was preceded in death by his parents; his wife, Martha Jean Lucius; two brothers, Wayne Lucius and Jimmy Lucius; and sister, Geneva Shackelford. Graveside services will be 10 a.m. Saturday, December 12, 2020 in Lee Memorial Park with Ricky Sanderford officiating. Honorary pallbearers will be his grandsons: Michael Turner, Matt Turner, Blake Sanderford, Austin Sanderford, Daniel Sanderford and Wade Lucius. Expressions of sympathy may be left at www.peguesfuneralhome.com.

The family of William "Snap" Lucius created this Life Tributes page to make it easy to share your memories.

Send flowers to the Lucius family.