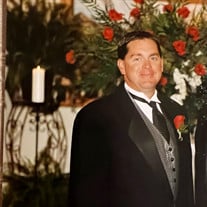 Tupelo--William Patrick Rogers, 51, departed this life on Wednesday, February 9, 2022, at North Mississippi Medical Center after a sudden illness. On November 28, 1970, he was born in Tupelo to the late William Therman Rogers and Susie Ann Rogers. He was a graduate of Tremont High School. He was the owner of Rogers Dirt Construction. Patrick had a heart of gold and would give the shirt off of his back. He was the hardest working man and enjoyed a good hard day's work. His smile and laugh were contagious. He was down-to-earth, gentle, and kind. He loved animals of all kinds, especially his dog "Dewey." His hobbies included riding motorcycles and traveling on his slingshot. His family was the most important to him and always came first. He was the most wonderful father, husband, son, brother, uncle, and friend. On December 31, 2021, grandfather was added to his list of titles with the birth of his beautiful granddaughter Scarlett Eden Dulaney. He is survived by his wife, Jolie Lana Rogers; one daughter, Madison Nicole Dulaney (Tyler); one granddaughter, Scarlett Dulaney; one son, Joslan Lee Matthew Washington; one brother, Timothy Rogers; one nephew, Ace Rogers; his mother, Susie Rogers. He was preceded in death by his father and grandparents. Services honoring his life will be 2 p.m. Saturday, February 12, 2022, at the Jefferson Street Chapel of W. E. Pegues with Brother David Timms officiating. Burial will follow at Auburn Cemetery. Visitation will be 12 p.m. until service time Saturday, February 12, 2022 at W. E. Pegues, Tupelo. W. E. Pegues Funeral Directors is entrusted with arrangements. Pallbearers are Pete Malone, Tim Smith, Derrick Washington, Erick Washington, Jay Morgan, and Donney Pearce. Expressions of sympathy and fond memories may be left at www.peguesfuneralhome.com.

Tupelo--William Patrick Rogers, 51, departed this life on Wednesday, February 9, 2022, at North Mississippi Medical Center after a sudden illness. On November 28, 1970, he was born in Tupelo to the late William Therman Rogers and Susie Ann Rogers.... View Obituary & Service Information

The family of William Patrick Rogers created this Life Tributes page to make it easy to share your memories.

Send flowers to the Rogers family.