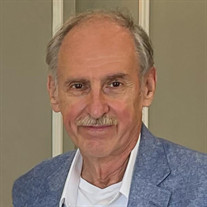 Bill Hodges, a retired Air Force pilot, made his flight to Glory on December 15, 2021. Bill was born to Harold W. Hodges, Sr., and Alene Campbell Hodges on October 27, 1947, in Memphis, TN. He grew up in Jackson, MS., graduating from Provine High School in 1965. He attended Mississippi State University receiving his degree in 1969 - GO DAWGS! While at Mississippi State he was honored to be a part of the Air Force ROTC program. Bill was commissioned as an Air Force officer when he graduated to serve his country with pride. While at Mississippi State he ventured on a blind date where he met his life-long love, Patricia (Patti) Alexander, and they were married on July 16, 1968. After graduation, Bill completed his flight training at Columbus AFB as a member of the first class to complete Pilot Training at Columbus and embarked on a twenty-two year career as an Air Force pilot. Bill’s Air Force career took him on many exciting missions around the world. Starting in 1970 he began flying T-37s and T-38s at Columbus AFB. In 1971 he and Patti moved across the country to Mather AFB in Sacramento, California where he flew T-29s. In 1973, while at Mather AFB, God blessed Bill and Patti with their first son William Wesley. Bill then took a remote assignment from 73-74 to Osan Air Base in South Korea. There he flew VT-29s. Bill continued to fly T-29s and worked at the Command Post at Aviano Air Base in Italy from 74-77. In 1977 Bill was stationed at Andrews AFB in Maryland. It was in 1977 that God again blessed Bill and Patti with a second son Wade Hanson. Bill started his flying at Andrews in T-39s, then C-12s from 78-79. However, in 1979, Bill began flying in the 89th MAW Special Air Missions (SAM FOX), where he would fly and command C-135s. He was entrusted to safely fly congressmen, senators, executive cabinet members, top military officers, and others to places all over the world, every continent except Antartica. Bill would tell stories of his missions for years to come. In 1984, Bill was transferred to the 1st Detachment of the 89th at Hickam AFB in Hawaii. There he flew C-135s, where he continued to fly dignitaries to places in the Pacific, Australia, and Asia. In 1987 Bill was stationed back at Andrews AFB where he retired from the Air Force in 1989. After retirement, He and Patti returned to her hometown of Tupelo, MS and after a brief period in sales, he returned to doing what he loved. Bill began a second career serving his country for over 27 years as a simulator and classroom instructor at Columbus AFB. Bill loved flying planes and teaching new pilots to love flying. Bill was forced into retirement in 2021 due to the pandemic. Bill was known to all as a caring man who always thought of others. He was funny and had a very quick wit because he knew something about everything. He was a tinkerer and could fix or build anything. A great storyteller, he could entertain for hours about the places he had visited or the things he had seen. To his friends and family, Bill was the strongest and most resilient man you would ever meet. His strength encouraged everyone around him. He was not defeated by his cancer but has won the battle and is with Jesus in a healed body. He loved his family deeply and he will be sorely missed on this side of Heaven. Bill was raised by Godly parents and made a profession of faith in his Lord and Savior, Jesus Christ, at an early age. He was raised in the Alta Woods Presbyterian Church in Jackson, MS and at the time of his passing was a member of First Baptist Church, Tupelo. Bill was predeceased by his grandparents, William F. and Fleeta Hodges and Harvey and Ruth Campbell, by his parents Harold and Alene Hodges and his nephew, Wayne Hodges. He is survived by his loving wife of fifty-three years, Patricia (Patti) Hodges; son William W. (Wes) Hodges, wife Jeannie and their children, Harrison and Rachel; son Wade H. Hodges, wife Belinda and their children, Briana, Hunter, Warren, Bethany, Hovan, and Wren. He is also survived by his brother, Harold W. Hodges, Jr., wife Kathy; brother-in-law, Don Alexander wife Janet; brother-in-law Arnold Alexander wife Connie; and several nieces, nephews, great-nieces and great-nephews. The family would like to thank Dr. Prasad, Lynn, Erika and the Electrophysiologist team; Dr. Hill and the Oncology team from NMMC; Dr. Chowdhury and the Oncology team from CTCA in Newnan, GA. W.E. Pegues Funeral Directors is in charge of arrangements. Visitation will be Monday, December 20th, from 5 until 7 pm at W.E. Pegues, Tupelo. On Tuesday, December 21st there will be visitation from 10 until service at 11am at First Baptist Church of Tupelo. Burial will be at Old Monroe Cemetery, Algoma. Pallbearers will be Don Alexander, Arnold Alexander, Harrison Hodges, Hunter Hodges, Warren Hodges, Ricky Cornelius, Charles Watson, and Danny Porter. Honorary pallbearers will be Danny Simons and members of the Don Land Sunday School class. Expressions of sympathy and fond memories may be left at www.peguesfuneralhome.com.

Bill Hodges, a retired Air Force pilot, made his flight to Glory on December 15, 2021. Bill was born to Harold W. Hodges, Sr., and Alene Campbell Hodges on October 27, 1947, in Memphis, TN. He grew up in Jackson, MS., graduating from Provine... View Obituary & Service Information

The family of Capt. William H. "Bill" Hodges, USAF, Ret. created this Life Tributes page to make it easy to share your memories.

Bill Hodges, a retired Air Force pilot, made his flight to Glory...

Send flowers to the Hodges family.