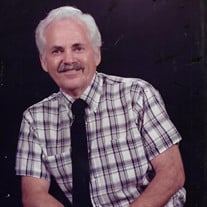 Saltillo- W. T. Bumpers, 86, died Monday, October 18, 2021, at his home in Saltillo. W. T. was born March 14, 1935 in Altitude, Mississippi to Noel and Delzie Bumpers. He grew up and went to school in Prentiss County. On July 26, 1958 he married Bobbie Matteson Bumpers. They lived in DeRidder, Louisiana before moving to Mississippi. In 1974 they bought their forever home in Saltillo. W. T. known by friends and family as “Dub” was also passionately known by the grandchildren and great-grandchildren as “Pop T.” He was a very accomplished and talented brick and stone mason. Owning his very successful business Bumpers Masonry, and later Bumpers and Son Masonry, he spent years doing work he loved. His talent was very sought after, and had him traveling throughout the state and surrounding states. W. T. greatest loves were his Lord and Savior Jesus Christ, his wife, children, and grandchildren, and great-grandchildren. He was a charter member of Faith Baptist Church. W. T. had a great love for The Praise Sunday School Class at Faith Baptist Church, where members became family. He enjoyed wood working and working with his hands creating bird houses and miniature log cabins. W. T. loved to fish and would get so excited packing up for those trips, that had him on the water before the sun came up. He missed those trips terribly when his illness forced him into letting go of his boat. The illness that he so bravely fought since 2009 is only mentioned because of his handling of it. It is an example of his beautiful and gentle character, the liver disease being a direct result of a severe injury during what was to be an outpatient surgery, is noteworthy because he never complained nor spoke of any blame. “The measure of a man is not how he behaves in moments of comfort, but how he stands at times of controversy and challenges.” MLK, Jr. He is survived by his son, Perry Bumpers (Kim) of Saltillo; two daughters, Lorrie Jackson (Mike) of Guntown, and Mistye Moore (Jimmy) of Booneville; grandchildren, Erica Morgan (Brian), Brad Jackson (Deana), Garrett Bumpers (Morgan), TeJay Moore, Haleigh Moore, and Heather Moore; great-grandchildren, Emma, Andrew, Cooper, Turner, Kara, Lennon, Addie, North, Path, and Ridge due in December; sisters, Vern, Jewel, and Vonnie; sisters-in-law, Helen McAleer, Faith Wallick, and Helen Bumpers; cousin, David Bumpers, and beloved dog, Fancy. W. T. was preceded in death by his beautiful wife of 62 years, Bobbie; parents, Noel and Delzie Bumpers; brothers, Cleo and Bob; and granddaughter, Kristen Paige Moore. Visitation will be 11 a.m. until service time Thursday, October 21, 2021, at Faith Baptist Church, Saltillo. Funeral services honoring W. T. 's life will be 1 p.m. Thursday, October 21, 2021 at Faith Baptist Church, Saltillo with Dr. Phil Ellis officiating and Tommy Dallas and Ray Oliver speaking. Burial will be in Campbelltown Cemetery. W. E. Pegues Funeral Directors is in charge of the arrangements. Pallbearers will be Mike Jackson, Brad Jackson, Richard Roper, Brian Morgan, Jimmy Moore, Garrett Bumpers, Mike Miller, and Ray Clayton. Honorary pallbearers will be members of his The Praise Sunday School Class at Faith Baptist Church. Memorials may be made to Faith Baptist Church, 553 County Road 681 Saltillo, MS 38866 or charity of your choice. Expressions of sympathy may be left at www.peguesfuneralhome.com.

The family of W. T. "Dub" Bumpers created this Life Tributes page to make it easy to share your memories.

Send flowers to the Bumpers family.