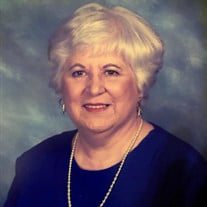 Virginia “Gini” Brandt passed away Thursday, September 9, 2021 at the Quince Nursing Center in Memphis. Gini was born January 22, 1944 in Crockett County, Tennessee, the daughter of Mr. and Mrs. William L. Pratt. She graduated from high school in Brownville, Tennessee, before entering Enrii School of Beauty Culture in Memphis and worked there as a cosmetologist for few years. Virginia accepted Jesus as her Savior and Lord in July of 1965, and became a member of Bellevue Baptist Church in 1966 when she was baptized. She married Karl Brandt in November of 1967 and soon afterwards moved to Tupelo. Gini worked as a hair stylist and later as a Mary Kay consultant before retiring. Gini became a dedicated member of West Jackson Street Baptist Church serving faithfully in many areas including working with the homebound ministry, singing in the choir, and helping with the preschool children’s choir. She had a special gift of writing poetry and in May of 1999, she was honored in Washington D.C by the International Society of Poetry with her work being listed in the Library of Congress. Gini’s poetry became a ministry to encourage others, as well as, encouraging herself. Virginia leaves behind her sister, Dee Pratt of Collierville, Tennessee; two brothers, Bobby Pratt and wife, Lanette, of Brownsville, Tennessee and Dr. Charles Pratt and wife, Linda, of Somerville, Tennessee; two brothers-in-laws, Louis Brandt and wife, Lucia, of Houston, Texas and John Brandt and wife, Marie, of Needville, Texas; sisters-in-law, Carolyn Kapp of Alpharetta, Georgia and Allison Brandt of Houston, Texas; and a host of nieces and nephews. She was preceded in death by her husband, Karl of 32 years, her brother William O. Pratt, and her parents. Services honoring Gini’s life will be 2 p.m. Thursday, September 16, 2021 at the Jefferson Street Chapel of W.E. Pegues with Dr. Charles Pratt, Dr. Bert Harper and Rev. Jason Pratt officiating. Visitation will be 1 P.M. until service time at W.E. Pegues Tupelo. Burial will take place at Lee Memorial Park. Pallbearers will be selected from her Church Family and Tupelo friends. Memorial gifts may be given in her memory to Calvary Baptist Church, located at 501 W. Main Street, Tupelo MS 38801 in Tupelo or another favorite charity, the American Family Association, P. O. Drawer 2440, Tupelo MS 38803 Expressions of sympathy and fond memories may be shared at www.peguesfueralhome.com.

The family of Virginia Brandt created this Life Tributes page to make it easy to share your memories.

Send flowers to the Brandt family.