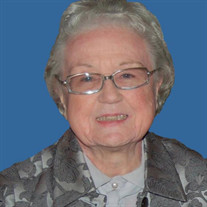 Virginia Josephine (Jo) Mason Benson, faithful wife, mother, and grandmother passed into eternity on April 7, 2022. She lived 97 years on this earth. Jo was born on February 22, 1925, the only child of John Price and Mary Etta Mason. She grew up on Robins Street in Tupelo. At an early age she fell in love with music. By the time she was in high school, she was playing for worship services and other events at First Baptist Church. There was never a time when she did not look to Christ as her Savior. She was 11 years old when the disastrous 1936 tornado struck Tupelo and in high school when Pearl Harbor was attacked. After World War II, she met and married Jim Benson of the Brewer Community. They were married 70 years before his death in 2016. She had no aspirations other than to love her husband and care for her family. The Bensons were faithful members of Wesley United Methodist Church where she served as organist and pianist for over 40 years. Jo was a homemaker, and Jim worked as a diesel mechanic for only one company until his retirement in the mid-80s. Both said that the retirement years were the best time of their lives. In addition to relishing their time just being together every day, one of their favorite pastimes was an afternoon drive with no destination. They particularly enjoyed the adventure of getting lost on local county backroads and riding around until they recognized a highway or landmark that would send them back home. Friends and family were always welcomed by her sweet disposition which she maintained even in the years after her husband’s death when her only desire was to see him again. During lucid moments when she remembered that one of her grandsons and his family lived in her former home, she would always say, “I just hope they are as happy as we were.” In her last years she lived with her daughter, who was also her best friend. Judy and her family lovingly cared for her every need. She loved her grandchildren and great grandchildren, as well as her daughter-in-law and son-in-law. She will be missed and fondly remembered for demonstrating that there are few things in life more blessed than simple kindness and gentleness expressed in love and service to family and friends. She was preceded in death by her husband, Jim; a grandson, Justin Franks; and a great-granddaughter, Eliza Benson. She is survived by a daughter, Judy and her husband, Shorty Franks; a son, Rusty and his wife, Ann, all of Tupelo; two granddaughters, Mason Franks of Tupelo, and Emory Kirk (Adam) of Corinth; three grandsons, Houston Franks (Meggan) of Zachary, Louisiana, Graham Benson (Peri) of Collierville, Tennessee, Kyle Benson (Gabby) of Tupelo; and ten great-grandchildren, Madsion and Patrick Franks, Reid and Knox Benson, Griffin, Elinor, and Elliot Benson, and Graci Laird, Mattie Ruth, and Mary Ford Kirk; nephew Butch Benson (Ann) of Roxboro, North Carolina; and niece Buffy Garrett of Germantown, Tennessee. A graveside service will be held at 2:30 p.m. Sunday, April 10, 2021 at Lee Memorial Park in Verona with Rev. Bill Bradford officiating. W.E. Pegues Funeral Directors has been entrusted with the arrangements. In lieu of flowers, the family request donations be made to Mississippi Methodist Senior Services, 109 S. Broadway St., Tupelo, MS 38804; or Wesley United Methodist Church, 2010 W. Main St., Tupelo, MS 38801. Expressions of sympathy and fond memories may be shared at www.peguesfuneralhome.com.

Virginia Josephine (Jo) Mason Benson, faithful wife, mother, and grandmother passed into eternity on April 7, 2022. She lived 97 years on this earth. Jo was born on February 22, 1925, the only child of John Price and Mary Etta Mason. She grew... View Obituary & Service Information

The family of Virginia Jo Benson created this Life Tributes page to make it easy to share your memories.

Send flowers to the Benson family.