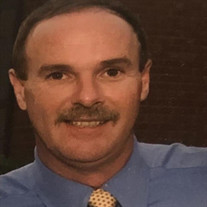 Saltillo—Victor Bruce “Vic” McAnally, 56, passed away unexpectedly on Thursday, March 11, 2021 at the North Mississippi Medical Center. He was born in Pontotoc on January 13, 1965 to Leonard McAnally Jr. and Carroll Bridgman McAnally Driskill. Vic worked in manufacturing and also was the owner of Vic’s Place in Sherman. He was a member of the Anchor Church. Vic enjoyed deer hunting and fishing and had a passion for collecting and hunting for arrow heads. He will be greatly missed by his family and friends who loved him dearly. Vic leaves behind his mother, Carroll Driskill; his father, Leonard McAnally (Vickie); his sister, Sherrie Hearn (Larry); two nieces, Brandy Henson (Jason) and Lacey Clements (JR); great-nieces and nephew, Adalynn, Isabela, Paisley, Vada, and Paxton. He was preceded in death by his grandparents, Leonard and Ruth McAnallly, Robbie Bridgman, and Polly Austin. Visitation will be 1 until 3 p.m. Sunday, March 14, 2021. Services honoring Vic’s life will be 3 p.m. Sunday with Dr. Forrest Sheffield and Rev. Jerry Welch officiating. Burial will be in Lee Memorial Park. The services will be live streamed and recorded for those unable to attend. Pallbearers will be Don Eddie Ferguson, Rod Marsinelli, Wayne Brown, Eddie Nobles, John Henton, and Thomas Horton. Honorary pallbearers will be William Curlin, Casey Clayton, Glenn McCarver, and Bradford Robertson. Expressions of sympathy may be left at www.peguesfuneralhome.com.

The family of Vic McAnally created this Life Tributes page to make it easy to share your memories.

Send flowers to the McAnally family.