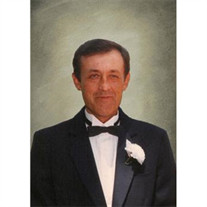 Tommy Estes Mooreville - Tommy J. Estes, 73, the owner of Estes Electrical Heat and Air Service, passed away Monday, June 6, 2016, at North Mississippi Medical Center in Tupelo. He was born June 3, 1943, to E. H. and Verbal Mae Dozier Estes. After graduating in 1963 from Mooreville High School, he began a 17 year career at Pennsylvania Tire and Rubber Company. There he served as Vice President of the local United Rubber Workers Union. Upon the closing of the company, he returned to school and completed an associates of applied science degree in electrical technology at Itawamba Junior College. Tommy then began his 35 year career as an electrician. He was the owner of Estes Electrical Heat and Air Service and was well known throughout Lee County. He was once voted as "Lee County's Best Electrician". Tommy was a past board member of Homebuilders and Remodelers Association of North Mississippi. Since 2005, he has served as a board member of Tombigbee Electric Power Association. While in this position he served on the Insurance Committee, Rate Committee and Buildings and Grounds Committee. Tommy loved nothing more than campaigning for reelection and never met a stranger. Tommy was an avid gun collector and previously owned Estes Gun Shop where he sold and repaired guns. He was a member of Mantachie Church of Christ. Survivors include his wife of 52 years, Myra Wardlaw Estes of Mooreville; children, Annette Harrison (Mitch) of Dorsey, Jason Estes (Ann) and Amanda Horton (Cary) both of Mooreville; grandchildren, Josh Estes (Taylor McKinney) and Brian Estes (Mackenzi Eubank) both of Mooreville, Alex Harrison of Dorsey, Samantha and Sierra Horton and Hannah Estes of Mooreville; great-granddaughter, Riley Kate Estes; brother, Willie Gene Estes of Dorsey; sisters, Martha Draper of Herculaneum, Missouri, Maynor Blackburn of Collierville, Tennessee and Mary Hallman of Tupelo and several nieces and nephews. He was preceded in death by his parents; brothers, Fred, Holder, Hoyle, Joe Howard, Hugh Allen "Dinky" and Robert Estes and Harold Sullins; sisters, Margie Cook, Janice Estes and Geneva Melko and grandson, Thomas Bradley Estes. Visitation will be from 4 until 9 p.m. Wednesday, June 8, 2016 at W. E. Pegues, Tupelo. Services will be 2 pm Thursday, June 9, 2016, at the Jefferson Street Chapel of W. E. Pegues with Minister Larry Lott and Minister Leon Willis officiating. A graveside service will follow in Eggville Cemetery. Pallbearers will be Bill Camp, Josh Estes, Brian Estes, Greg Estes, Jeff Estes, Chris Estes and Sammy Holder. Honorary pallbearers will be O. R. Dulaney, Norman Clark and the Tombigbee Electric Power Association Board of Directors. Memorials may be made to Mantachie Church of Christ, 5386 Highway 363, Mantachie, MS 38855. Expressions of sympathy may be left at www.peguesfuneralhome.com.

The family of Tommy Estes created this Life Tributes page to make it easy to share your memories.

Send flowers to the Estes family.