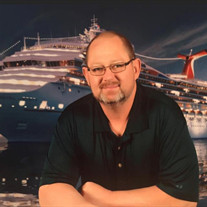 AUBURN COMMUNITY - Timothy Wayne Hallmark, 57, passed away Monday, April 18, 2022 at the North Mississippi Medical Center after a courageous battle of cancer. He was born June 10, 1964 in Baldwyn, the son of Reuel and Mary Helen Williams Hallmark. Tim graduated from Tupelo High School and Itawamba Community College. For over 20 years, he worked for Weatheralls Incorporated. Later he worked as a bio-med technician for North Mississippi Medical Center for ten years until his health began to decline. Tim served as a deacon at Connect Church. He was a member of the "North Auburn Breakfast Bunch" and never missed a morning of fellowship with his buddies. Active in his community, Tim loved the time he spent coaching boys' football and baseball where he touched many young lives. A true outdoorsman, he loved hunting and fishing. All during Tim's illness he faced each day with a positive attitude and uplifting spirit. He leaves behind his wife of nearly 33 years, Kathy Hallmark; two children, Bryan Hallmark (Lacey) and Baylee Sims (Brandon), all of the Auburn Community; brother, Gary Hallmark (Janie) of Nettleton; a special cousin who was more like a sister, Lisa Davis (Rodney) of Guntown; sister-in-law, Pat Blush (Jack) of Florida; brother-in-law, Barry Lyle (Rachel) of Auburn; and his mother-in-law, Lynn Lyle of Auburn. He was preceded in death by his parents; his son, Tyler; a brother, Danny Hallmark; and his father-in-law, Paul Lyle. Visitation will be 5 until 7 p.m. Wednesday at W.E. Pegues, Tupelo. Services will be 10 a.m. Thursday with Rev. Terry Pierce officiating. Burial will be at Cross Roads Cemetery. Pallbearers will be Jacob Lyle, Logan Lyle, Tommy Sudduth, Mark Roberts, Russ Harrington, and Davey Cole. Honorary pallbearers will be the North Mississippi Medical Center Bio-Med Department. In lieu of flowers, memorials may be made to the Connect Church Building Fund, 1650 North Veterans Blvd., Tupelo MS 38804 Expressions and fond memories may be shared at www.peguesfuneralhome.com

AUBURN COMMUNITY - Timothy Wayne Hallmark, 57, passed away Monday, April 18, 2022 at the North Mississippi Medical Center after a courageous battle of cancer. He was born June 10, 1964 in Baldwyn, the son of Reuel and Mary Helen Williams Hallmark.... View Obituary & Service Information

The family of Tim Hallmark created this Life Tributes page to make it easy to share your memories.

Send flowers to the Hallmark family.