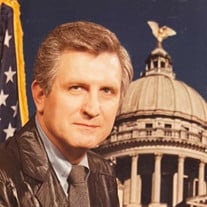 Tupelo—Thomas Lee “Tommy” Brooks passed away Sunday, September 5, 2021 at the Regency Hospital in Meridian following a lengthy illness. He was 87 years old. Tommy was born in Itawamba county’s Turon Community on December 6, 1933, the son of Charlie E. and Lurcy Murphy Brooks. After his graduation from Tupelo High School, he earned his Industrial Engineering degree from Mississippi State University and began his career at General Electric in Hampton, South Carolina while completing his military obligations in the South Carolina National Guard. Always striving towards making his town and state a better place for others, he was extremely active in many local civic clubs and boards, resulting in his being named Tupelo’s outstanding young man of the year in the 1960s and being elected to the Mississippi House of Representatives in 1972, where he served until his retirement in 1988. Tommy was the epitome of an entrepreneurial spirit, establishing Tommy Brooks Oil Co. in 1967 which has continued to serve many communities in North Mississippi for over 50 years. He was active in the Mississippi Petroleum marketers association, eventually serving as president. He was an avid fan and supporter of Mississippi State University, championing and advocating for the school’s needs as well as those of the state’s community colleges and establishing endowments in the athletics, education and business departments. He was a dedicated life long member of the United Methodist Church and was currently an active member of Wesley United Methodist Church in Tupelo, Mississippi. His faith was very important to him and always came first in his life. Tommy leaves behind his wife, Peggy Brooks of Tupelo; two daughters, Lyn Brooks Taylor of Belden and Lee Brooks Murphree and her husband, Greg, of Tupelo; two step-children, Lori Raines and her husband, Roger and Leanne London, all of Tupelo; his sister, Charlotte Brooks Flanagan and her husband, Mike, of Brandon; seven grandchildren, four step-grandchildren, and three great-grandchildren. He was preceded in death by his parents; his daughter, Dr. Susan McLaren “Laren” Brooks; and his son-in-law, Srgt. Bobby W. Taylor. A celebration of Tommy’s life will be 11 a.m. Friday, September 10, 2021 at the Jefferson Street Chapel of W. E. Pegues with Rev. Roger Puhr officiating. Burial will be in Tupelo Memorial Park. Visitation will be 4 until 7 p.m. Thursday, September 9, 2021 at W.E. Pegues, Tupelo. The service will be live streamed and recorded for those unable to attend. Pallbearers will be Kirk Wilburn, Ronnie Warren, Keith Parham, Zach Sisk, Charles Collier, Steve Stanphill and Scott Parham. Honorary pallbearers will be Kenneth Warren, Leroy Carver, Bill Reeder, Gary Walker, Bob Aycock, Dan Langley, Pete Harris, Larry Chittom, Charlie Barber, Paul Smithey, John Murphy Jr., and the employees past and present of Tommy Brooks Oil. Expressions of sympathy may be shared at www.peguesfuneralhome.com.

The family of Thomas L. "Tommy" Brooks created this Life Tributes page to make it easy to share your memories.

Send flowers to the Brooks family.