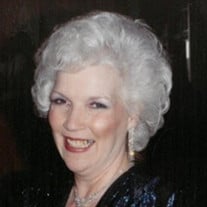 Sybil DeVaughn   Tupelo - Sybil DeVaughn, 86, surrounded by family, passed away peacefully Friday, December 1, 2017, at her residence. She was born August 9, 1931, to L.J. and Carrie Elizabeth Bedford Turner. She was a life long resident of Tupelo and until declining in health remained active in the community. In 1951, she married the love of her life J.W. "Sonny" DeVaughn and together they had three children. Sybil was very active in the community and often visited local nursing homes and provided clothing for many needy children and had a heart for the sick and poor. She was a charter member of  Lakeview Baptist Church and School where she taught Sunday school, sang in the choir, was involved with the church Mission Program, and hosted missionaries while they were in town with her church. She truly had a heart for God.   Survivors include husband, J.W. DeVaughn of Tupelo; daughters, Jan Holt (Aaron) of Tupelo, Joy Shullaw (Wayne) of Lafayette, Louisiana; son, Brad DeVaughn (Michelle) of Mantachie; brothers, Hugh Turner of Texas, Raymond Turner of Texas, Rodney Turner of Tupelo and Bill Turner of Texas; sister, Delta Mae Clayton of Tupelo; sister-in-law, Bobbie Evans of Tupelo; grandchildren, Chris Harbin, Michael Ritter, Cameron Stanford, Jake Shullaw, Raven Menard, Rachel DeVaughn and Rebecca DeVaugh; great-grandchildren, Blake Harbin, Chase Harbin, Conner Ritter, Madison Ritter, Ashley Stanford and Myles Gary.   She was preceded in death by her parents, L.J. and Carrie Elizabeth Turner. Visitation will be 12 p.m. until service time Monday, December 4, 2017 at W. E. Pegues, Tupelo.  Services will be 2 p.m. Monday, December 4, 2017, at Jefferson Street Chapel  of W. E. Pegues with Rev. Robert Garland officiating. Burial will be in Tupelo Memorial Park.   Pallbearers will be Brad DeVaughn, Rodney Turner, Raymond Turner, Cameron Stanford, Myles Gary and Jake Shullaw.   Honorary pallbearers will be Wayne Shullaw, Aaron Holt, Hugh Turner, Raymond Turner and Chase Harbin.   The service will be live streamed and recorded for those who may not be able to attend at www.peguesfuneralhome.com.   Expressions of sympathy may be left at www.peguesfuneralhome.com.

Sybil DeVaughn   Tupelo - Sybil DeVaughn, 86, surrounded by family, passed away peacefully Friday, December 1, 2017, at her residence. She was born August 9, 1931, to L.J. and Carrie Elizabeth Bedford Turner. She was a life long resident of... View Obituary & Service Information

The family of Sybil DeVaughn created this Life Tributes page to make it easy to share your memories.

Send flowers to the DeVaughn family.