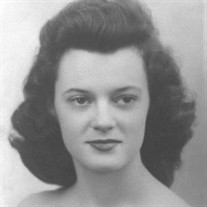 Laura Sue Kelly Wilson went to Heaven on April 15, 2020, in Ridgeland, Mississippi. She was preceded in death by her husband, Harry Maury Wilson, and her grandsons, Lee Mathew Wilson, and Coleman Parker Wilson. She was survived by her three children, Harry Maury Wilson Jr., Celia Leigh Wilson Curtis, and John Kelly Wilson, and her grandchildren, Harry Maury Wilson III, David Phillip Curtis, Patricia Lauren Curtis Ruby, Jensen McLeese Curtis, Jacob Dale Wilson, Elizabeth (“Bess”) Lucille Wilson Laporte, and Christian Kelly Wilson, and her great-grandchildren, Ashton Camille Wilson, Harry (“Harrison”) Maury Wilson IV, Addison Leigh Curtis, Oliver Allen Ruby, Elora Leigh Ruby, Leah Nicole Laporte, David Alexander Laporte, and Stephen Gabriel Laporte. Susie, as she was affectionately known, was born in Verona, Mississippi, on June 21, 1927, to Celia Dewdrop Porter Kelly and Robert Arthur Kelly. Sue was the youngest of four children; her older siblings were Roy, Marie, and Louise. Growing up in Tupelo, Mississippi, she met the love of her life in the fourth grade. Harry Wilson moved to Tupelo from Alabama after the death of his father. They were childhood sweethearts and married in 1945. They shared 65 years of marriage, raising their three children who were their pride and joy. Sue and Harry were active members of Saint Luke Methodist Church in Tupelo, serving as counselors for the Methodist Youth Fellowship for many years. Susie had a beautiful singing voice which she shared by singing in the church choir every Sunday. She worked for the Reverend E.S. Furr, the District Superintendent of the Methodist Church for many years and volunteered with the American Red Cross, for the Tupelo Public Library, and for her church. Sue also taught in the Follow Through Program in the Tupelo Public Schools. Sue’s and Harry’s personalities complimented each other beautifully. Susie would say, “I can forgive anything. Just don’t bore me!” And Harry would respond, “I wish you love, laughter and music!” There was no shortage of laughter; Susie had a wonderful sense of humor. She could take a joke, tell a joke, or play one on you just for fun. Susie had an infectious laugh that came from the bottom of her heart. She was just plain fun! Susie and Harry were also exceptional dancers. They mastered the Jitter Bug in their younger days. During their years in Nashville, they were incredible square dancers. The Wilson home was indeed filled with love, laughter and music. Susie was extremely bright, graduating with honors from Tupelo High School in 1945. Marrying that same year, she became a devoted wife and then three years later, a devoted mother. She was a model homemaker, an excellent cook, an immaculate house keeper, and a gracious host. She spent her life in service to others and was truly a servant of God. She lived her faith, spreading love and joy to all she encountered. Her personality was so warm and inviting that wherever she went, people would follow her around, telling her their life stories. Susie was constantly reading - which was probably the only time she was both still and awake. She had two speeds - on or off. Quite the card shark, Susie would almost always win at Bridge and other card games. Yet, she was such a gracious winner and so care-free, that her friends never begrudged her a win. Susie made everything fun and made others feel important, valued, and loved. Openminded and nonjudgmental, she saw the good in everyone. She loved people and people loved her. Susie was a positive force of love and generosity and will be sorely missed by all who knew her. A private family graveside service will be held at Tupelo Memorial Park. W.E. Pegues Funeral Directors is entrusted with the arrangements. Expressions of sympathy may be left at www.peguesfuneralhome.com.

Laura Sue Kelly Wilson went to Heaven on April 15, 2020, in Ridgeland, Mississippi. She was preceded in death by her husband, Harry Maury Wilson, and her grandsons, Lee Mathew Wilson, and Coleman Parker Wilson. She was survived by her three... View Obituary & Service Information

The family of Sue Kelly Wilson created this Life Tributes page to make it easy to share your memories.

Send flowers to the Wilson family.