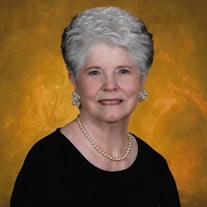 Sue Kenney Carroll, 91, passed away Tuesday, December 8, 2020 at her residence at Traceway Retirement Community. A native of Union county, she was born August 2, 1929 to Willie Parmer and Cora Scott Parish. When she was an infant, her family relocated to Tupelo where she grew up attending Tupelo Schools and was a 1947 graduate of Tupelo High School. Following her marriage to Clark Kenney in 1948, she moved to Amory. In 1958, she and Clark moved to Pontotoc where they raised their family until his death in 1993. She married Henry M. Whitfield and they later made a home with at Traceway Retirement Community Cottages. Following Henry’s death, Sue was reunited with her high school classmate, Bill Carroll, whom she married in 2010 and remained so until his death. She enjoyed traveling, sewing, knitting, painting, reading and working puzzles as well as spending time with family friends. Survivors include her children, Linda Kenney Caldwell (Jimmy), Jimmy Kenney (Angie) and Melissa Kenney; step-sons, Bill Carroll (Joel) and David Carroll (Laura); grandchildren, Ashley Butler (Christy), Ken Butler (Buffie), Kris Butler (Rebecca), Jake Kenney (Donna) and Katherine Kenney; five step-grandchildren; 11 great-grandchildren; three great-great-grandchildren; sister, Rebecca Jean Cone; brother, Tracy Parish; a host of nieces and nephews; her very best friend and travel partner, Kathleen Armstrong; and many other very close friends including Mrs. Ruth Lee. She was preceded in death by her parents; her first husband and father of her children, James Clark Kenney, Sr. who died in 1993; second husband, Henry Whitfield who died in 2006; and her third husband, Bill Carroll who died in 2018; brothers, Raymond, Ralph, Russell and Roger Parish. Visitation will be 5 until 7 p.m. Thursday, December 10, 2020 at W.E. Pegues, Tupelo. Services will be 1 p.m. Friday, December 11, 2020 at the Jefferson Street Chapel of W.E. Pegues with Dr. Embra Jackson and step-son, David Carroll, officiating. Graveside services will follow in Pontotoc Memorial Gardens. Pallbearers will be Ashley, Ken, and Kris Butler, Jake and Brooks Kenney and Broc Butler. The service will be lived streamed and recorded for those who may not be able to attend at www.peguesfuneralhome.com. Memorials may be made to the Sunday Fund at Traceway Retirement Community, P. O. Box 1567, Tupelo, MS 38802 or St. Jude Children's Research Hospital, PO Box 50, Memphis, TN 38101. The family wishes to express their sincerest thank you to the Comfort Keepers caregivers, Michelle Sheffield and the staff at Kindred Hospice for the care and comfort they offered Mrs. Sue and her family. Expressions of sympathy may be left at www.peguesfuneralhome.com.

Sue Kenney Carroll, 91, passed away Tuesday, December 8, 2020 at her residence at Traceway Retirement Community. A native of Union county, she was born August 2, 1929 to Willie Parmer and Cora Scott Parish. When she was an infant, her family... View Obituary & Service Information

The family of Sue Kenney Carroll created this Life Tributes page to make it easy to share your memories.

Send flowers to the Carroll family.