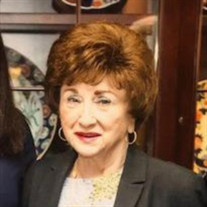 Sye Imbler Tupelo- Anita Sue Oldham Imbler peacefully passed away on September 15, 2021 with her husband by her side. Born in Memphis, Tennessee on September 6, 1936, she lost her father at a very young age. Her mother, Midge Bennett Tully, and her stepfather, Jim Tully, raised Sue in Blytheville, Arkansas, where she attended Blytheville High School. After graduation she went to work for an International Harvester dealer and met a handsome field representative, who became her beau, and the rest is history for she and Charles “Chuck” Imbler celebrated 65 years of marriage on May 18, 2021. The early years of their marriage were spent in Memphis, where they welcomed their only child, Charles Imbler, Jr., who was her pride and joy. In 1968 the Imbler family moved to Tupelo where Chuck worked at Truck Center, Inc., later becoming the owner. Together, Chuck and Sue traveled extensively on company trips. It is said behind every successful man is a loving, supportive wife. Sue enjoyed that role in the family, and she extended that support to her son and to her community as well. An active member of St. James Catholic Church in Tupelo, she was also a member of the Tupelo Garden Club, a co-leader of Dixie Debs, which is a Tupelo High School girls community service club, President of the Junior Auxiliary, and President of Sanctuary Hospice House Auxiliary. A loyal Ole Miss supporter, Sue was often in the stands with her family cheering on the Rebels at football and basketball games. She is survived by her husband, Charles “Chuck” Imbler, daughter-in-law Trentice Imbler, and two granddaughters, Mallie Imbler of Arlington, Virginia and Carrol Trent Imbler of Tupelo. She was preceded in death in 2013 by her son, Charles “Chuck” Imbler, Jr. Visitation will be Friday, September 17 at 2 p.m. at St. James Catholic Church in Tupelo, followed by a Mass of Christian Burial at 3 p.m. Father Henry Shelton and Father Tim Murphy will preside over the service. The family requests that masks be worn in accordance with CDC guidelines. The funeral mass can be viewed on the St. James Catholic Church facebook page. Pallbearers include Dr. Joe Bailey, Pat Caldwell, Mitch Ellett, Robin Haire, Jim Ingram, Jr., Jimmy Robbins, Mark Monts, and James Williams. Memorials may be made to St. James Catholic Church, 1911 N. Gloster Street, Tupelo, MS 38804. Expressions of sympathy and fond memories may be left at www.peguesfuneralhome.com.

Sye Imbler Tupelo- Anita Sue Oldham Imbler peacefully passed away on September 15, 2021 with her husband by her side. Born in Memphis, Tennessee on September 6, 1936, she lost her father at a very young age. Her mother, Midge Bennett Tully,... View Obituary & Service Information

The family of Sue Imbler created this Life Tributes page to make it easy to share your memories.

Send flowers to the Imbler family.