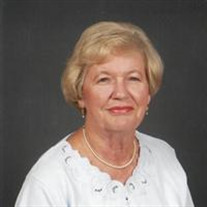 Shannon - Sue Ann Camp Collins, 81, went to be with her Lord and Savior Monday, May 8, 2017, at North Mississippi Medical Center after a lengthy illness. She was born in Mantachie on February 4, 1936, to Joseph Luther and Ermye Coggins Camp. She graduated from Itawamba Agricultural High School in 1954 and attended IJC. While at IJC, she played basketball and was a majorette. She was voted Miss Itawamba and in 1993 was named Alumnus of the Year. On December 18, 1955, Sue married Shorty Collins and they moved to Shannon and lived there their entire married life. Sue worked at Renasant Bank, formerly known as People's Bank, and was over Commercial and Consumer Lending. She was over the entire first floor and earned the title of First Vice President. After her retirement, Sue went back to work at Renasant part-time; overall, she worked there for a total of 54 years. Sue enjoyed playing golf and cooking and loved her grandchildren. She was a long-time member of First Baptist Church, Shannon.   Survivors include her husband of 61 years, Shorty Collins of Shannon; sons, Bill Collins (Lisa) of Shannon and Joe Collins (Christi) of Baldwyn; grandchildren, Brooke Bentley (Greg) of Hattiesburg, Mandy Ragon (Kyle) of Tupelo, Cason Collins of Baldwyn and Jana-Claire Collins of Baldwyn and great-grandson, Ross Ragon.   She was preceded in death by her parents and brother, Vaughn Camp.   Visitation will be from 4 until 7 p.m. Wednesday, May 10, 2017 at W. E. Pegues, Tupelo.   Services will be 11 a.m. Thursday, May 11, 2017, at the Jefferson Street Chapel of W. E. Pegues with Rev. David Langerfeld and Rev. Jerry Estes officiating. Graveside services will follow in Shannon Cemetery.   Pallbearers will be Mitch Waycaster, Randy Wilburn, Cason Collins, Kyle Ragon, Greg Bentley, Thomas Camp, Joe Camp and Ed Priest.   Honorary pallbearer will be John Smith.   Expressions of sympathy may be left at www.peguesfuneralhome.com.

Shannon - Sue Ann Camp Collins, 81, went to be with her Lord and Savior Monday, May 8, 2017, at North Mississippi Medical Center after a lengthy illness. She was born in Mantachie on February 4, 1936, to Joseph Luther and Ermye Coggins Camp.... View Obituary & Service Information

The family of Sue C. Collins created this Life Tributes page to make it easy to share your memories.

Send flowers to the Collins family.