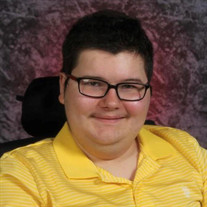 Dennis—Stephen Nathaniel Johnson passed away Monday, May 24, 2021 at the North Mississippi Medical Center. A vibrant 21 year old who inspired so many, he was born December 29, 1999 to the late William Johnson Jr. and Stacey Price Johnson Sweeney. Stephen was incredibly smart, graduating with honors from Belmont High School. In fact, he was often described as beyond brilliant. He enjoyed typical teen age activities like playing video games, but there was nothing typical about Stephen. He was selfless and thoughtful, always placing the needs of others above his own. His participation with the Muscular Dystrophy Association, Shriner’s Hospital, and LeBonheur Children’s Hospital gave hope and encouragement to untold numbers of families struggling with childhood illnesses. He had a great love for his family who will miss him every day. Stephen leaves behind his mother and stepfather, Stacey and Bernice Sweeney of Dennis; three sisters, Kaleigh Johnson, Sara Sweeney and Gracie Sweeney; his brother, Cameron Johnson; his grandparents, Michelle Walsted of Dennis, Gary Price and his wife, Ann of Myrtle, and Paula Davidson and husband Kenny of Fulton; his aunt, Ashley Price; his uncle, Ben Crum and wife, Alaina; and a host of many extended family members. He was preceded in death by his father, William; his grandfathers, John Walsted and Glen Johnson; and his aunt, Christina Johnson. Visitation will be 1 p.m. until service time Saturday, May 29, 2021 at W.E. Pegues, Tupelo. Services celebrating Stephen’s life will be 3 p.m. Saturday at the Jefferson Street Chapel of W.E. Pegues with David Gould and Kenny Davidson officiating. The service will be live streamed and recorded for those unable to attend. Pallbearers will be Cameron Johnson, William Sweeney, Dennis Wilder, and Kenny Davidson. Expressions of sympathy may be left at www.peguesfuneralhome.com.

Dennis&#8212;Stephen Nathaniel Johnson passed away Monday, May 24, 2021 at the North Mississippi Medical Center. A vibrant 21 year old who inspired so many, he was born December 29, 1999 to the late William Johnson Jr. and Stacey Price Johnson... View Obituary & Service Information

The family of Stephen N. Johnson created this Life Tributes page to make it easy to share your memories.