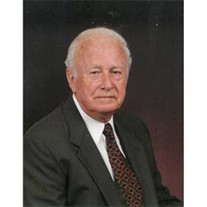 STANLEY RYAN TUPELO - Stanley Ryan, 88, went to Heaven on August 10, 2016. His wife, son, daughter, and brother were by his side at home when he departed this life. He was born in Prentiss County to Guy and Gertrude Ryan on February 26, 1928. He was a Christian and active member of First Baptist Church, Verona for 63 years. He sincerely enjoyed the fellowship of his Sunday school class. True greatness is measured in terms of service. He selflessly served his family and the people of his community. He served faithfully as a deacon at First Baptist Church Verona. The love of God was demonstrated in his life daily. He leaves a legacy as a Christian husband, father, grandfather, and great-grandfather. He was affectionately named "Da Da" by his grandchildren and great-grandchildren. There was a mutual, unconditional love between him and his family. He served the Army of the United States in Japan with 720th Military Police Battalion. He assisted in the enforcement of military law and regulations. He received the World War II Victory Medal, and Army of Occupation Medal Japan. Mr. Ryan started his career with Borden's Dairy Products in 1952 inside the plant. He advanced to a sales position, and later became supervisor in charge of sales. He was promoted Sales Manager/Assistant Plant Manager over North Mississippi, Southwest Tennessee, and Northwest Alabama. He retired from Borden's Dairy Products in 1992. He is survived by his wife of 68 years, Evelyn Faye Murphy Ryan; one son, Phil Ryan of Tupelo; one daughter, Marilyn (Randy) Wood of Tupelo; three granddaughters, Tara (Jason) Harris of Tupelo, Miranda (Jon) Maynard of Tupelo, and Morgan (Lee) Adams of Guntown; one grandson, Bart Ryan of Jackson; four great granddaughters, Caroline Harris, Mary-Evelyn Maynard, Georgia-Kate Maynard, and Mia Catherine Harris; and two great grandsons, Parker Harris and Jordin Adams. He is also survived by sisters; Margaret Sale Lindley, Betty Lou Mink, and brothers; Jimmy Dale Ryan, and Curtis (Effie) Ryan. Mr. Ryan is preceded in death by his parents; Mr. and Mrs. Guy Ryan; his sisters, Ruby Lee Ryan, Genell Ryan; brothers, Eugene Ryan, George Holland Ryan, and Raymond Ryan. Pallbearers will be Lee Adams, Barry Cayson, Jason Harris, Jon Maynard, and Gary Scott. Honorary pallbearers are members of his Sunday School class at First Baptist Church Verona. A celebration of his life will take place Sunday, August 14 at 3:30 p.m. at First Baptist Church, Verona with Reverend Larry Dunlap and Dr. David Hamilton officiating. The visitation will be at W. E. Pegues Funeral Home Saturday, August 13 from 5 p.m. to 7 p.m. Memorials may be made to First Baptist Church Verona, 278 College Avenue, P.O. Box 1093; Verona, Mississippi 38879. Expressions of sympathy may be left at www.peguesfuneralhome.com

STANLEY RYAN TUPELO - Stanley Ryan, 88, went to Heaven on August 10, 2016. His wife, son, daughter, and brother were by his side at home when he departed this life. He was born in Prentiss County to Guy and Gertrude Ryan on February 26, 1928.... View Obituary & Service Information

The family of Stanley Ryan created this Life Tributes page to make it easy to share your memories.

Send flowers to the Ryan family.