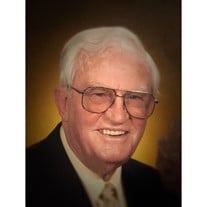 SMITH HEAVNER Tupelo - Franklin Smith Heavner, 89, passed away Saturday, November 25, 2017, at Countrywood Manor in Mantachie. He was born one of 12 children, August 8, 1928, to John Henry and Lillian Smith Heavner. Smith grew up on a farm in the Baldwyn area and later in Red Bay, Alabama. Smith played football at Baldwyn High School and graduated in the class of 1949 as Class President. He continued to play football at Northeast Junior College where he received his associates degree. On April 17, 1953, he married Sarah Roye in Vardaman. Smith served his country in the United States Army as a medic during the Korean War. He was a salesman at Borden's Milk and Ice Cream for 18 years and, while there, received the Million Mile award. He also worked at the Daily Journal for 8 years in sales and worked for the City of Tupelo in the Water and Light, and Public Works departments. After retirement, Smith served as a City Councilman of Tupelo for 12 years. Smith was a member of the Breakfast Civitan Club for several years and served as past president. He was on the Board of Directors at the Regional Rehabilitation Center in Tupelo and a member of the VFW and American Legion Post #49. Smith was also a Master Masonic Lodge and an Order of the Eastern Star member. Smith enjoyed watching his grandson play football through high school and college. Talking to people was one of his favorite hobbies. Smith and Sarah were a part of two dinner clubs, where they fellowshipped, played cards and dominos. He delighted in being a winner, teasing people, and loved babies and children. Smith was an active member of Harrisburg Baptist Church for over 60 years, where he served as Deacon, Sunday School Superintendent, and Director of Singles Department for several years. Survivors include wife, Sarah Heavner of Tupelo; daughter, Becky Heavner Glover (Winky) of Meridian; grandson, Hamp Glover of Meridian; sister, Bobbye Heavner Roye (Sam) of Amory; sisters-in-law, Opal Heavner of Illinois and Jean Heavner of Baldwyn, and a host of nieces and nephews. He was preceded in death by his parents and siblings, Ruby Arnold (Barris), J.V. Heavner, Paul Heavner (Eloise), Lurline Collum (Delmar), Troy Heavner, Marie Holland (Idonis), Billy Joe Heavner, Johnny Heavner and two infant brothers. Visitation will be from 5 until 8 p.m. Monday, November 27, 2017, at W. E. Pegues, Tupelo. Services will be 11 a.m. Tuesday, November 28, 2017, at Harrisburg Baptist Church. Burial will be in Pleasant Grove Cemetery in Pontotoc County. W. E. Pegues Funeral Directors is in charge of the arrangements. Pallbearers will be Billy Kendrick, C.W. Jackson, Tony Mason, Merle Carlock, James Wilemon and Sammy Woods. Honorary pallbearers will be members of the Sanctuary Sunday school class at Harrisburg Baptist Church. Memorials may be made to Regional Rehabilitation Center, 615 Pegram Drive, Tupelo MS 38801 or Sanctuary Hospice House, PO Box 2177, Tupelo MS 38803. Expressions of sympathy may be left at www.peguesfuneralhome.com.

SMITH HEAVNER Tupelo - Franklin Smith Heavner, 89, passed away Saturday, November 25, 2017, at Countrywood Manor in Mantachie. He was born one of 12 children, August 8, 1928, to John Henry and Lillian Smith Heavner. Smith grew up on a farm... View Obituary & Service Information

The family of Smith Heavner created this Life Tributes page to make it easy to share your memories.

Send flowers to the Heavner family.