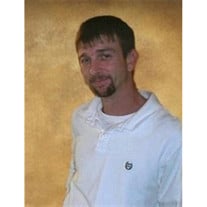 Shaun McLevain Shannon - Wesley Shaun McLevain, 36, passed away Monday, September 26, 2016, at his home after an extended illness. He was born June 25, 1980, to Wesley Willard McLevain and Stephanie Ann McCarley. He was a painter by trade,... View Obituary & Service Information

The family of Shaun McLevain created this Life Tributes page to make it easy to share your memories.

Send flowers to the McLevain family.