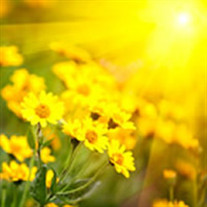 SANDRA A. BLAND   Tupelo - Sandra Teresa Anderson Bland, 71, passed away Sunday, June 25, 2017, at Sanctuary Hospice House. She was born April 29, 1946, to Clyde and Dorothy Murphy Anderson and was raised in Savannah, Georgia. Sandra met her husband, Howard Bland, in Ft. Lauderdale, Florida and they were married on June 14, 1965. She was a homemaker and enjoyed spending time with her grandchildren and great-grandchildren. She loved children and babysat them for a number of years. Sandra was a faithful Christian and devoted wife. She was a member of West Main Street Church of Christ.   Survivors include her husband of 52 years, Howard Bland of Tupelo; children, Teresa Smith (Danny) of Saltillo and Daniel Bland of Belden; sister, Anita Randolph of Coker, Alabama; grandchildren, Jerrica Stogner (Scott) of Blue Mountain, Brandon Wallace of Coldwater and Morgan, Hannah and Haden Bland of Tupelo; great-grandchildren, Jessie, Derik, and Nicholette Stogner.   She was preceded in death by her parents, sister, Faye McKinney and brother, Clyde Anderson, Jr.   Visitation will be from 9 a.m. until service time Wednesday, June 28, 2017, at West Main Church of Christ.   Services will be 11 a.m. Wednesday, June 28, 2017, at West Main Church of Christ with Minister Doug Greenway officiating. Graveside services will follow at 3 p.m. in Marvin Hill Cemetery in Cumberland.   Expressions of sympathy may be left at www.peguesfuneralhome.com.

The family of Sandra A. Bland created this Life Tributes page to make it easy to share your memories.

Send flowers to the Bland family.