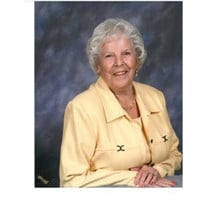 SALLIE PARKER Guntown- Sallie Mae Parker 78, passed on to be with her Lord and Savior on March 28, 2016. She was born a true Tupelo Honey to Jim and Maudie Ellis on September 13, 1937. Sallie was raised in the Tator Hill community and educated in Mooreville. She later resided in the Guntown/Euclatubba area. Sallie was a dedicated , caring, giving, and loving mother. She was the wife of the late Howard L. Parker for fifty-four years. Sallie retired from the North Mississippi Medical Center with over thirty-five years of service and then became a volunteer. As a volunteer for the hospital , she was awarded Volunteer Of The Year for 2012.  She loved to socialize with others, for she never met a stranger. Sallie enjoyed gardening, manicuring/painting her nails, QVC, Mountain Dews and dancing with friends in Guntown and Alpine. She was a proud member of The Birmingham Ridge Baptist Church. Sallie is survived by three daughters, Monda Lee (Mark) of Saltillo Janet Davis (Pete) of Hattiesburg and Melinda Evans (Mike) of Amory;  two sons, Wayne Parker (Tina) of Saltillo and Steve Parker (Teresa) of Tupelo; two remaining Ellis sisters, Brenda Carter of Saltillo and Helen McLarty (Billy) of Saltillo; brother, James Ellis of Verona; thirteen grandchildren and nine great-grandchildren. She is proceeded in death by her parents, Jim and Maudie Ellis; one brother, Truman Ellis; husband, Howard L. Parker; one son Robert Payne of Texas; one grandson, Brady Parker Evans; four sisters, Shirley House, Dot Ellis, Delma Payne, and Velma Fowler. The family would like to express Love and Gratitude to Rev. Bobby Holland and to all others who prayed and visited with Sallie. Special thanks to Dr. Ricky Parker and Dr. Barry Bertolet for your professionalism and friendship throughout the years. Services will be 2 p.m. Wednesday, March 30, 2016 at the Saltillo Chapel of W.E. Pegues, Saltillo. Pallbearers will be friends and family. Honorary Pallbearers will be the Volunteer Services of North Mississippi Medical Center. Visitation will be 4 - 8 p.m. Tuesday, March 29, 2016 at W. E. Pegues, Saltillo. Expressions of sympathy may be left at www.peguesfuneralhome.com

SALLIE PARKER Guntown- Sallie Mae Parker 78, passed on to be with her Lord and Savior on March 28, 2016. She was born a true Tupelo Honey to Jim and Maudie Ellis on September 13, 1937. Sallie was raised in the Tator Hill community and educated... View Obituary & Service Information

The family of Sallie Mae Parker created this Life Tributes page to make it easy to share your memories.

SALLIE PARKER
Guntown- Sallie Mae Parker 78, passed on to be...

Send flowers to the Parker family.