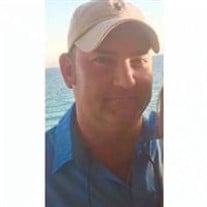 Ryan Tackett Guntown- Ryan Lee Tackett, 38, passed away May 16, 2017 at his home. Ryan, an only child, was born September 10, 1978 to Sherrie Overton Tackett. Ryan attended Red Bay schools where he participated in sports from a young age. Ryan’s grandfather gave him a love for baseball that lasted a lifetime. Ryan played baseball at Northwest Shoals Community College and briefly at The University of Alabama. Ryan passed on this love by helping the New Site Royals boys baseball team. Ryan previously worked in the restaurant business and if you sat at the bar at Chili’s you were certainly entertained by his jokes and dry wit. This is where he met his wife Desirae, in May 2006. Desirae and Ryan were married at the beach on October 6, 2012 surrounded by their family and friends. Last month they had a fabulous week back at the beach getting to eat great food, lay in the sun, and deep sea fish. Ryan and Desirae had many adventures. While their time was cut short, she will have memories to last a lifetime. Ryan was the co-founder of Mississippi English Bulldog Rescue. Cletus, a rescue, became Ryan’s own. He accompanied Ryan everywhere, riding in the back seat. Ryan loved the University of Tennessee Football Team. His signature look was always wearing a piece of UT clothing. This fall he attended the University of Tennessee verses Virginia Tech game at Bristol Motor Speedway. Ryan was currently self employed in woodworking and welding. He could truly make anything. He loved going to auctions and estate sales to find odd pieces to make decor for their home. Ryan was the life of the party. He always had a smile and was cracking a joke, making you smile and laugh. He had a huge heart and would help anyone. There will be lots of stories told in the future. Ryan will be greatly missed and was loved. Ryan is survived by his wife, Desirae Ivy Tackett of Guntown; his son, Peyton Tackett of Red Bay, Alabama; he has several cousins; his in-laws and five brothers-in-laws. Ryan was preceded in death by his mother, whom he missed immensely, Sherrie Overton Tackett and his grandparents Elois and Andie Overton. Following his request, he will be cremated and there will be no memorial services. Expressions of sympathy may be left at www.peguesfuneralhome.com.

Ryan Tackett Guntown- Ryan Lee Tackett, 38, passed away May 16, 2017 at his home. Ryan, an only child, was born September 10, 1978 to Sherrie Overton Tackett. Ryan attended Red Bay schools where he participated in sports from a young age. Ryan&#8217;s... View Obituary & Service Information

The family of Ryan Tackett created this Life Tributes page to make it easy to share your memories.

Send flowers to the Tackett family.