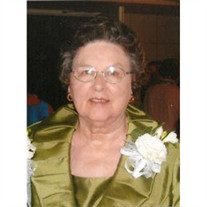 RUTH YOUNG Verona - Jo Ruth McWhorter Young, better known as "Gabby" to her family and friends, went to be with her Lord and Savior on February 15, 2016, after a brief stay at Sanctuary Hospice House. She was born on January 31, 1920, in Plantersville, Miss., to John and Manalieu McWhorter. She graduated from Plantersville High School, where she was valedictorian of her class, and attended the "W", where her major was home economics. She later decided to pursue a career in business and served as postmaster of Verona Post Office for over 35 years. Ruth played the piano for different churches, as needed, as a youth and later taught Sunday school in her adult class for many years. She was also a member of the choir and two different ladies' mission groups. She often recounted her salvation experience to her family and always tried to be a true witness for her Lord and Savior. Her greatest witness was showing love to others, being kind to everyone she met, and living a lifestyle of thankfulness and contentment. She was a member of First Baptist Church, Verona. Her favorite hobbies were sewing, working in her yard and garden, and reading. She also loved cooking, swimming, horseback riding, bird hunting, and fishing with her family. Some of her favorite time was having her grandchildren visit and spend the weekend. She even enjoyed riding four wheelers with them in her nineties. She is survived by her son, Thomas A. Young, Jr. (Gail); daughter, Marian Moore (Freddie) of Verona; five grandchildren, Tracy Miller (Danny), Meggan Crunkleton (Wesley), Breck Young, Melanie Moore, and Joseph Moore; and four great-grandchildren, Kate and Jack Miller and Price and Byrne Crunkleton. She was preceded in death by her husband, Thomas A. Young, Sr.; her parents; and her three brothers, Richard McWhorter, John William McWhorter, and Frank Hoyle McWhorter, Sr. Visitation will be from 4 until 7 p.m. Tuesday, February 16, 2016, at W. E. Pegues, Tupelo. A stateroom service will be held 11 a.m., Wednesday, February 17, 2016, at W. E. Pegues with Rev. David Hamilton officiating. Graveside services will follow in Lee Memorial Park. Memorials may be made to First Baptist Church, Verona, 278 College Avenue Verona, MS 38879, and Sanctuary Hospice House, PO Box 2177 Tupelo, MS 38803. Expressions of sympathy may be left at www.peguesfuneralhome.com.

RUTH YOUNG Verona - Jo Ruth McWhorter Young, better known as "Gabby" to her family and friends, went to be with her Lord and Savior on February 15, 2016, after a brief stay at Sanctuary Hospice House. She was born on January 31, 1920, in... View Obituary & Service Information

The family of Ruth Young created this Life Tributes page to make it easy to share your memories.

Send flowers to the Young family.