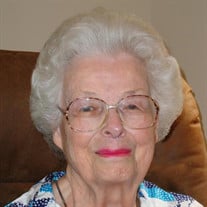 Ruth Ann Wilcox Tupelo- Ruth Ann Wilcox, 93, passed away from natural causes in her home Sunday morning, September 6, 2020. A resident of Tupelo since 1960, Ruth Ann was born and raised in Mansfield, Ohio. Her parents were, George Wallace Fox, Sr. and Golda (Stull) Fox. Ruth Ann had an older brother, George, Jr. who passed away in 2016. Ruth Ann attended Ohio State University and remained an ardent Buckeye fan her entire life, watching the football games on television, unless they were losing! Her family could tell how Ohio State was fairing by her TV settings. If the volume was on, they were ahead. If the set was muted, they were behind. If they were really losing, she’d have changed the channel. On July 5, 1947, she married Norman R. Wilcox and the couple had three children: Donald Lee Wilcox, Bruce Alan Wilcox, and Pamela Jean Wilcox Armour. Norman, an employee of Mansfield Tire and Rubber Company, was transferred to Tupelo in 1960, and the family put down roots here. Ruth Ann became active in the First Presbyterian Church in Tupelo as well as volunteering at the hospital. She was active in the local bowling leagues and bridge groups for many years. Following her husband’s death in 1980, she became the sole caregiver for her son, Don (who himself passed away in 1989). Ruth Ann was a devoted mother and grandmother, an avid bird watcher, and ardent animal lover, especially dogs. Although she claimed not to care much for cats, she had over the years, shared her living quarters with two different felines, both of which she constantly fussed over. She’d even leave the TV set to their favorite channels. Ruth Ann will be deeply missed by her son, Bruce Wilcox, and his wife, Melissa; her daughter, Pam Armour and her husband, Louis; grandchildren, Ginger Parker (Bobby), Alex Wilcox (Brandy), Adam Armour (Amanda), Kristyn Martz (Brian). She was also blessed with three great-grandchildren and one great-great-grandchild. Visitation will be 12 until 2 p.m. Wednesday, September 9, 2020 at W.E. Pegues, Tupelo. A private family service will be held Wednesday, September 9, 2020 with Rev. Ron Richardson officiating. Burial will be in Tupelo Memorial Park. W. E. Pegues Funeral Directors is in charge of the arrangements. The service will be live streamed and recorded for those who may not be able to attend at www.peguesfuneralhome.com. Memorials may be made to the Tupelo-Lee Humane Society, 2795 Cliff Gookin Blvd, Tupelo, MS 38801. Expressions of sympathy may be left at www.peguesfuneralhome.com.

The family of Ruth Ann Wilcox created this Life Tributes page to make it easy to share your memories.

Send flowers to the Wilcox family.