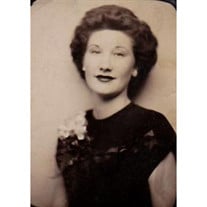 RUTH A. RAINEY Saltillo - Ruth Aleen Rainey, 91, passed away, May 22, 2017 at Sanctuary Hospice House. She was born in Hollister, Missouri in August 10, 1925 to Harry Richard and Clara Bell Gasser Baublit. On August 7, 1948, she married James Harry Rainey in Piggott, Arkansas. Ruth's working life mostly revolved around fabric and sewing. She did sewing jobs for the public until her husband's passing in 1984, and then worked in the fabric department at Wal Mart for 20 years before retiring. She enjoyed taking care of her flowers, reading, word puzzles, cooking and baking. She was in regular attendance to a women's coffee club affectionately called "Muggers Club". Ruth loved her cats. She was a member of Lakeview Baptist Church, Tupelo. Survivors include her son, David Rainey (Dedra Streit Rainey) of Saltillo; sisters, Rose A. Foster of Saltillo and Barbara A. Crews of Wright City, Missouri; 11 grandchildren and numerous great-grandchildren. She was preceded in death by her parents; husband; infant son, Sanford "Sandy" Vorhies; daughter, Margaret Dianne Vorhies Brock and brother, James Hugh Rainey. Visitation will be 5 until 7 p.m. Friday, May 26, 2017 at W. E. Pegues, Saltillo. Services will be 11 a.m. Saturday, May 27, 2017 at the Saltillo Chapel of W. E. Pegues with Rev. Rob Garland officiating. Graveside services will follow at 3 p.m. in Forrest Memorial Cemetery South in Memphis, Tennessee. The family would like to give a special thanks to the care team at Baldwyn Nursing Facility and the caregivers at Sanctuary Hospice House. Memorials may be made to Sanctuary Hospice House, PO Box 2177, Tupelo, MS 38803. Expressions of sympathy may be left at www.peguesfuneralhome.com.

RUTH A. RAINEY Saltillo - Ruth Aleen Rainey, 91, passed away, May 22, 2017 at Sanctuary Hospice House. She was born in Hollister, Missouri in August 10, 1925 to Harry Richard and Clara Bell Gasser Baublit. On August 7, 1948, she married James... View Obituary & Service Information

The family of Ruth A. Rainey created this Life Tributes page to make it easy to share your memories.

Send flowers to the Rainey family.