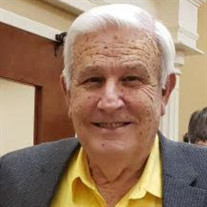 Roy Allen Norris, 76, went to his heavenly home on April 6, 2021 at the North Mississippi Medical Center after a sudden illness. A Lee County native and lifelong resident, Roy was born August 16, 1944 to Columbus Richard Norris and Melverta Hill Norris. During his school years he met the love of his life, Deletha Berryhill whom he married on November 15, 1963 and they shared 57 years together. Roy worked as a sales representative for Electric Machine Service for 35 years. He was a charter member of Bethany Baptist Church where he was ordained as a deacon and served as minister of music. He was a faithful member of Harrisburg Baptist Church for the past five years. He was passionate about Southern Gospel music and was known for his beautiful singing voice. Roy leaves behind his loving wife, Deletha Berryhill Norris of Saltillo; two children, Kim Lanphere (Paul) of Saltillo and Tim Norris (Catherine) of Pontotoc; four grandchildren, Brandi Stewart (Jordan), Connor Norris, Laken Norris, and Taylor Norris; four great-grandchildren, Sadie Claire , Liza Kate, and Blake Stewart, and Hendrix Green; two sisters, Mittie Sue Green (Hugh) of Southaven and Bernice Palmer of Eggville; brother, David Norris (Jettie) of Tupelo; and a host of extended family members. Services will be 11 .m. Friday, April 9, 2021 at the Jefferson Street Chapel of W. E. Pegues with Rev. John Gordon and Rev. Rob Armstrong officiating. Burial will be in Fellowship Cemetery. Visitation will be 5 until 7 p.m. Thursday and one hour prior to service on Friday at W.E. Pegues, Tupelo. The service will be live streamed and recorded for those unable to attend. Pallbearers will be Paul Lanphere, Jordan Stewart, Connor Norris, Craig Sanders, Andrew Sanders and Patrick Green. Expressions of sympathy may be left at www.peguesfuneralhome.com.

The family of Roy Allen Norris created this Life Tributes page to make it easy to share your memories.

Send flowers to the Norris family.