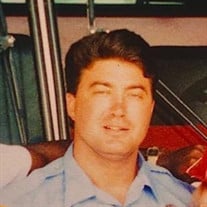 Ronald Anthony Allen “Ron”, 57, passed away Thursday, July 1, 2021 at his home. Ron was born June 9, 1964 in Blytheville, Arkansas to Pat and Jane Starnes Allen. He was raised in Greenville, Mississippi and graduated from Greenville Christian School, where he won the AA State Championship in football. After graduating from high school, he attended Mississippi College on a football scholarship and then transferred to Mississippi State University where he also played football and track. Ron proudly served his community as a fire fighter for the Tupelo Fire Department for over 20 years before he became disabled. He also thoroughly enjoyed hunting, fishing, water sports, and playing basketball and tennis with his daughter. Ron leaves behind his daughter, Tiana Jade Allen of Madrid, Spain/Tupelo and his parents, Pat and Jane Allen of Tupelo. He also leaves behind his sister-in-law, Sonia Allen and nephew, Cody Anthony Allen of California. He was preceded in death by his brother, Richard Scott Allen. In addition, he was preceded by his grandparents, Von K. Starnes and Vestle Taylor Starnes of Blytheville, Arkansas along with Vester Allen and Lucille Allen of Noxapater, Mississippi. Services honoring Ron’s life will be 2 p.m. Saturday, July 10, 2021 at the Jefferson Street Chapel of W.E. Pegues with Dr. Larry Walker officiating. Visitation will be 1 p.m. until service time Saturday at W.E. Pegues, Tupelo. The service will be live streamed and recorded for those unable to attend. Honorary pallbearers will be Butch Simmons, Bob Portwood, Charles Simpson, and the members of the Tupelo Fire Department. Expressions of sympathy may be left at www.peguesfuneralhome.com.

Ronald Anthony Allen &#8220;Ron&#8221;, 57, passed away Thursday, July 1, 2021 at his home. Ron was born June 9, 1964 in Blytheville, Arkansas to Pat and Jane Starnes Allen. He was raised in Greenville, Mississippi and graduated from Greenville... View Obituary & Service Information

The family of Ronald Allen created this Life Tributes page to make it easy to share your memories.

Send flowers to the Allen family.