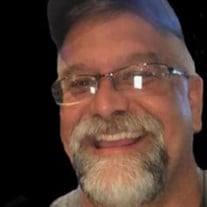 Saltillo--Robert Earl “Pigtail” Wooten, 54, passed away unexpectedly Saturday, March 13, 2021, at his home. Affectionately known to all his friends and family as Pigtail, he was born June 15, 1966 in Memphis, Tennessee, the son of Johnny and Sammie Freshour Wooten. He grew up in Saltillo where graduated from High School. Pigtail worked for Williams Transport as a truck driver and was a member of Saltillo First United Methodist Church. He enjoyed riding horses and working on his tractors and trucks. He loved having a good time with friends and family. He leaves behind his parents, Johnny and Sammie Wooten; two children, Cody Wooten (Mystie) and Katie Wooten; his brother John Wooten (Carron); two nephews, Lance and Shelton; and Cody and Katie’s mom, Renae Wooten, all of Saltillo He was preceded in death by his grandparents, Josie and Oscar Wooten and Jeff and Lula Freshour; and his uncle, Bill Wooten. Visitation will be 5 until 7 p.m. Monday, March 15, 2021 and also one hour prior to services on Tuesday at W.E. Pegues, Saltillo. Services will be 1 p.m. Tuesday at the Saltillo Chapel with Rev. Tim Green officiating. Pallbearers will be Charlie Wooten, Gary Kizner, David Wooten, Phillip Franks, Carry Howell, Cody Wooten, David Stephens, and Dale Warren Expressions of sympathy may be left at www.peguesfuneralhome.com.

The family of Robert "Pigtail" Wooten created this Life Tributes page to make it easy to share your memories.

Send flowers to the Wooten family.