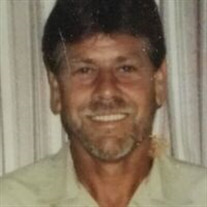 Robert Earl Ellis, 66, passed away Friday, June 5, 2020 at the North Mississippi Medical Center of an extended illness.  A Lee County native and lifelong resident, he was born March 15, 1954 to Charles R. and Ruth McColum Ellis.  Robert worked as a self employed carpenter for several years before his health began to decline.  He was a member of the Richmond Pentecostal Church and he enjoyed hunting and fishing. Robert is survived by his wife, Victoria Ellis; five children, Chad Ellis and Chris Ellis both of Nettleton, Deona Holland and her husband David, of Fulton; Angel Ellis of Mantachie, and Lance Bass and wife, Patience, of Mooreville; two brothers, Charles Ellis Jr. and wife, Linda, of Mooreville and Rocky Ellis of Fulton; and a sister, Judy Peters and husband, Jake, of Nettleton; eleven grandchildren and five great-grandchildren. He was preceded in death by his parents and a daughter, Candie Ellis. A service honoring Robert’s life will be held at 3 p.m. Monday at the Jefferson Street Chapel of W.E. Pegues with Bro. Ricky Pierce and Bro. Ricky Dill officiating.  Burial will be in Ellis Cemetery.  Visitation will be 5 p.m. until 8 p.m. Sunday at W.E. Pegues. Pallbearers will be Danny Harden, Paul Ellis, Richard Ellis, Lance Bass, Paul Moore and Wayne Elrod. Donations may be made for the expenses of Robert’s services at W.E. Pegues Funeral Directors, 535 W. Jefferson St., Tupelo, Miss.  38804.  Expressions of sympathy may be left at www.peguesfuneralhome.com.

The family of Robert E. Ellis created this Life Tributes page to make it easy to share your memories.

Send flowers to the Ellis family.