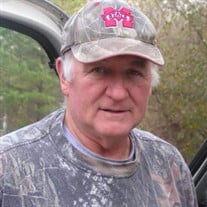 Tupelo- Robert “Bobby” Thomas, 69, died December 24, 2020 at North Mississippi Medical Center after a brief illness. He was born in Memphis, Tennessee, January 24, 1951 to Robert and Shirley Thomas and relocated to Tupelo in 1974 to work for Pennsylvania Tire. He later began building log cabins with his brother, Danny Thomas, with Old Southern Pine Log Homes. Eventually, he moved into residential building which led to homes being constructed all over the local area with his business, Thomas Construction Company. On December 18, 1968, he married Suzanne Dye with whom he just celebrated 52 years of marriage. His hobbies consisted of hunting, fishing, playing music, grilling and feeding any and everybody. His home was always the center of all holidays with Thanksgiving being the grand finale each year. His home was like a hotel, everyone was always welcome and his doors always opened. He was the most precious person that there ever was and will be missed by all for the rest of our lives. Survivors include his wife, Suzanne Thomas of Saltillo; three children, Robert N. Thomas, III (Tammy McCollum) of Saltillo, Amy Thomas (Jeff Rice) of Santa Rosa Beach, Florida and Matthew A. Thomas (Rebecca Malone) of Pascagoula; daughter-in-law, Kori Thomas (Gary Alexander) of Mantachie; 13 grandchildren; seven great-great grandchildren; two sisters, Pamela Sorrows (Jimmy) of Warner Robbins, Georgia and Connie Ward of Hernando; brother, Danny Thomas (Martha) of Tupelo; brother-in-law, Greg Dye of Saltillo; and many nieces and nephews that he adored. He was preceded in death by his parents; grandson, Dalton Rice; mother-in-law, Sara Dye; sister-in-law, Kim Dye; and brother-in-law, Larry Ward. Private family graveside services will be held Monday, December 28, 2020 in Sherman Cemetery with Rev. Tim Green officiating. W.E. Pegues Funeral Directors is in charge of the arrangements. Honorary pallbearers will be Matthew Thomas, Austin Burton, Ross Simpson, Owen Dye, Cash Thomas, Robbie Thomas and Jeffrey Rice. Expressions of sympathy may be left at www.peguesfuneralhome.com.

The family of Robert "Bobby" Thomas created this Life Tributes page to make it easy to share your memories.

Send flowers to the Thomas family.