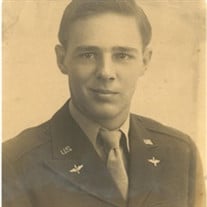 Robert W. "Bob" Williams Tupelo - Robert W. "Bob" Williams, 92, passed away Saturday, October 7, 2017 at his home. He was born December 15, 1924 to Zelna Boyd and Celia Williams in Lee County, Mississippi.   Bob was a great husband and father, and he was much loved by his children and grandchildren. He served in the U. S. Army Air Force during World War II. Following his service for his country, Bob worked as a Rural Carrier for the U. S. Post Office until his retirement. He was a long-time member of Plantersville Methodist Church. Bob was an avid hunter and golfer and excelled at both.   Bob is survived by his son, Stanley Williams of Tupelo; daughters, Donna Williams of Tupelo and Ellen Gray of Woodstock, Illinois; grandchildren, Stan Williams (Kelly) of Mooreville, Camille Powell (Walker) of Tupelo, Rob Whiteside of Tupelo, Alan Whiteside (Shae) of Brandon, Shannon Stringer (Will) of Oakland, Calif. and Jason Gray (Tracy) of Santa Rosa, Calif.; 13 great-grandchildren; and several nieces and nephews.   He was preceded in death by his parents; and brothers, Thomas and James Williams.   Services will be 2 p.m. Monday, October 9, 2017 at the Jefferson Street Chapel of W. E. Pegues with Dr. Bob Self and Bro. Matt Powell officiating. Burial will be in Plantersville Cemetery.   Pallbearers will be James "Bubba" Rogers, Jimmy Sudduth, Tommy Sudduth, Billy Tate Massengale, Stan Williams, Rob Whiteside, Alan Whiteside and John Michael Ballard.   Visitation will be from 11 a.m. until service time Monday, October 9, 2017 at W. E. Pegues, Tupelo.   Expressions of sympathy may be left at www.peguesfuneralhome.com.

The family of Robert W. "Bob" Williams created this Life Tributes page to make it easy to share your memories.