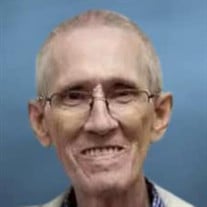 Richard Dale Johnson, a CPA to hundreds, a mentor to many, and a friend to all, met his final deadline August 10, 2020 at his home in Saltillo. He was surrounded by his family. He was 72 years old. He was born October 27, 1947, in New Site, to Thermon and Gretchen Vandevander Johnson. He was a country boy and he loved being outside exploring God’s creation. He grew up attending Siloam Church. He accepted Jesus in August of 1963. He was baptized in Jesse Sparks’ pond. Currently, he attended Crossway Church. He graduated from New Site High School in 1965. He married his childhood sweetheart, Diane Johnson, July 1, 1966. Their marriage lasted until her death on December 22, 2010. He received an accounting degree from Delta State University. He worked several years before opening his own CPA firm in Saltillo. He always talked about God blessing him with clients and credited God with his success. Richard tried to find a solution to every problem he faced. He will be remembered for many things- his powerful testimony, his unfailing work ethic, his generous celebrating spirit, and the roman candles he shot at everyone on New Year’s Eve. In many ways, Richard worked too hard, but he enjoyed his work. It was evident in the way he succeeded and the way the people who worked with him and for him enjoyed their work. But everyone knew he wasn’t a morning person! His office reflected his love for old memorabilia. These two sayings found in his office fit him well – “A messy desk is a sign of genius” and “Please don’t clean up my mess. You’ll confuse me and screw up my world.” This last year took a toll on Richard, but he did not give up or complain. His final hours were quiet and drama free, just like the man he was. He worked hard, always enjoyed the moment with a cup of coffee. His life will be remembered and cherished by his wife Ann Johnson; his sons and their wives, Jeff and Lori, Chris and Amy, and Van and Mindy; grandchildren, Noah, Seth, Cory, Meggan, Bailey, Brody, Daisy, Levi, Luke and one great-granddaughter, Kloye. He will be missed by his brother, Larry and Daralene, and by his sisters, Joyce Waddle; Reba and Randle Downs; Barbara and Fred Lee. Two step-daughters, Phyllis and Bruce Dodds; Betty and Tim Metheny. Two sisters-in-law, Linda and Ronnie Eaton; Jackie and Mike Stacy. He was loved by many nieces and nephews that called him Uncle Rich. Waiting to give him a hug and welcome him home- his wife, Diane; parents, Thermon and Gretchen; father and mother-in-law, Jack and Mildred; sister-in-law, Deb Johnson; two brothers-in-law, Larry and Gary; and his grandparents, Clifford and Annie Johnson, Levi and Myrtie Vandevander. Visitation will be 1 until 3 p.m. Wednesday, August 12, 2020 at W.E. Pegues, Saltillo. A graveside service celebrating his life will be 4 p.m. Wednesday, August 12, 2020 in Siloam Cemetery with Brother Haskell Sparks officiating. Pallbearers will be his grandsons: Noah, Seth, Brody, Levi, Luke and Cory. When we lose someone we love, we must learn to not live without them but to live with the love they left behind. “There is no expiration date on the love between a father and his sons.” Miss you already! Expressions of sympathy may be left at www.peguesfuneralhome.com.

Richard Dale Johnson, a CPA to hundreds, a mentor to many, and a friend to all, met his final deadline August 10, 2020 at his home in Saltillo. He was surrounded by his family. He was 72 years old. He was born October 27, 1947, in New Site,... View Obituary & Service Information

The family of Richard D. Johnson created this Life Tributes page to make it easy to share your memories.

Richard Dale Johnson, a CPA to hundreds, a mentor to many, and...