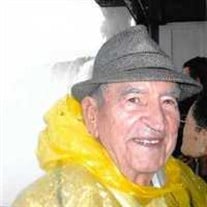 Priceville- Richard Harvey Anglin passed away on November 16, 2019 in Ridgeland. He was born on June 17,1922 at home in the Birmingham Ridge community near Saltilloto Eric Troy Anglin and Rhoda Eliza Ann Cleveland Anglin. His family attended Birmingham Ridge Baptist church where at the age of twelve, he accepted Jesus Christ as his Lord and Savior.   After graduating from Saltillo High School in 1939 at age 16, he enrolled in Mississippi State University. Upon graduation in 1943, he was commissioned as a lieutenant in the U. S. Army.   Following basic training, he was assigned to the 88th Infantry Division and served in North Africa and in Italy as a heavy mortar platoon leader. During his service, he was awarded the bronze star.   After returning to the United States in 1946, he married Frances Lillian Flippen in McCarley. He and Frances moved to the Priceville community near Tupelo. They were faithful members of Priceville Baptist church where they held many positions in the church and Lee county Baptist association. Singing in the choir and assisting with Bible Drill programs were especially joyful for him. He leaves behind many friends who were constantly in his thoughts and prayers.   After returning from service, he worked several jobs in the Tupelo area including in the U. S. Army reserve training servicemen transition to civilian life and Lee County deputy sheriff before retiring from Mid South Packers. He was a member of the Rotary club for many years.   Upon retirement, he became interested in family genealogy research. He traveled Mississippi, Alabama, Tennessee , and Louisiana searching for relatives. “Daddad” enjoyed taking his children and grandchildren on field trips to cemeteries.   On August 13, 2013, he suffered a stroke and was moved to an assisted living facility in Ridgeland to be closer to family. He attended Trace Ridge Baptist church.   He is survived by his children, Richard H. Anglin, Jr. (Beverly) of Madison, Joe Russell Anglin (Mary Kaye) of Dickson, Tennessee and Mary Frances Hudson of Starkville; seven grandchildren and eleven great-grandchildren whom he loved dearly, Sarah Johnson DuBard(Landon) , Laura Elizabeth Anglin,Joe Russell Anglin Jr., Martha Kaye Hastings (Jared), Emily Kate Newberry (Brad), Melinda Frances Porch (Michael), Nancy Carol Hudson and Lily, Colton, Noah, Julia, Charlotte, Amelia, Jackson, Madison, Levi, Owen, and Emma Kate; sister, Patricia Ann Stanford of Saltillo; and many nieces and nephews whom he cherished.   He was preceded in death by his parents; his wife; his sister, Mary Kathleen Crump; his brothers, William Cleveland Anglin and Wilson Troy Anglin; his son-in-law, Phillip Glen Hudson; and his grandson, Daniel Engle Anglin.   Visitation will be 10 a.m until service time Wednesday, November 20, 2019 at W.E. Pegues, Tupelo.   Funeral services for Harvey will be 11 a.m. Wednesday November 20, 2019 at the Jefferson Street Chapel of W.E. Pegues. Graveside services will be 3 p.m. Wednesday, November 20, 2019 in Oakwood Cemetery in Winona.     At his request, his granddaughters are to be his pallbearers.   The honorary pallbearers will be the Senior Mens Sunday School classes of Priceville Baptist church and Trace Ridge Baptist church.   Thanks is given to the staff and the many friends at Chateau Ridgeland facility. A special thanks is also given to the Assisting Angels care givers.   In lieu of flowers, the family requests donations be made to the Priceville Baptist church.   The service will be live streamed and recorded for those who may not be able to attend at www.peguesfuneralhome.com.   Expressions of sympathy may be left at www.peguesfuneralhome.com.

Priceville- Richard Harvey Anglin passed away on November 16, 2019 in Ridgeland. He was born on June 17,1922 at home in the Birmingham Ridge community near Saltilloto Eric Troy Anglin and Rhoda Eliza Ann Cleveland Anglin. His family attended... View Obituary & Service Information

The family of Richard Harvey Anglin created this Life Tributes page to make it easy to share your memories.

Send flowers to the Anglin family.