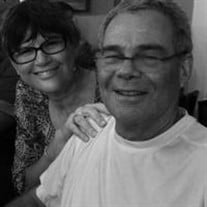 Rhonda Saunders   Fulton - Rhonda Diane Regnier Saunders, 52, passed away Tuesday, May 30, 2017, at the North Mississippi Medical Center in Tupelo. She was born in Salina, Kansas on August 8, 1964, to Ronald D. and Ellen Louise Knisley Regnier. Rhonda moved with her family to Kansas City, Missouri and Lubbock, Texas prior to moving to Little Rock, Arkansas where she lived most of her childhood and youth. She was a 1982 graduate of Hall High School in Little Rock and graduated with a BS in Nursing from the University of Northern Alabama. Rhonda received her Master’s in Nursing Administration from Delta State University. She was a Nursing Home Administrator at Baldwyn Nursing Facility of North Mississippi Medical Center. Rhonda was the coordinator for palliative care and instrumental in organizing the hospice program with North Mississippi Medical Center. She loved spending time on her pontoon boat on the Tenn-Tom waterway and enjoyed cross-stitching and reading. She loved her Lhasa Apso, Sophia and carried her everyday to the Nursing Home in Baldwyn. Rhonda was a member of All Saints’ Episcopal Church where she served on the vestry and was a member of the Altar Guild.   Survivors include one daughter, Erin Saunders of Chattanooga, Tennessee; one son, Adam Saunders of Seattle, Washington; father, Ronald D. Regnier of Fulton; sister, Linette Galbraith (Tony) of Redding, California; nephew, Corey Burch of Greenville, Texas and numerous additional family members who loved and supported her throughout her life.   She was preceded in death by her mother and husband, Thomas Saunders in 2016.   Visitation with viewing will be from 2 p.m. until 4 p.m. Thursday, June 1, 2017, at All Saints’ Episcopal Church.   Memorial services will be 2 p.m. Friday, June 2, 2017, at All Saints’ Episcopal Church with Dr. Billy Walton officiating with her son, Adam Saunders delivering the eulogy. Inurnment will follow at All Saints’ Columbarium.   Expressions of sympathy may be left at www.peguesfuneralhome.com.

The family of Rhonda Saunders created this Life Tributes page to make it easy to share your memories.

Send flowers to the Saunders family.