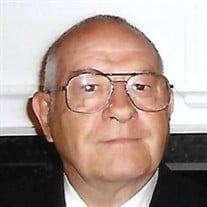 Verona- Ray and Martha Ellis Blythe shared the kind of love you thought only existed in movies. On June 24, 1955, they vowed to love and cherish each other “in sickness and in health, ‘til death do us part” but neither sickness nor death could separate one from the other. After 65 years of marriage, careers, and raising three daughters, their bodies began to age and their health decline, but their bond would not be broken. Even during their last few days on earth, the amazing staff of North Mississippi Medical Center Hospice found a way to keep them together in the same room. On November 11, 2020, Martha, 87, left this great journey on earth to be with her Lord and Savior and on November 13, 2020 Ray, 88, left his earthly body to join hands with his bride once again and enter the gates of heaven together. Ray was born in Itawamba county on April 7, 1932 to Samuel Lester and Susan Viola Ray Blythe. He graduated from Belden High School where he played basketball and baseball. As a young man, he joined the United States Army and served his country during the Korean Conflict. He later enjoyed a fulfilling career at Purnell's Pride, Marshall Durbin, and as a warehouse/transportation manager at MS Paper where he retired. Ray saw art in all things and was an exceptional woodworker. He once carved a Christmas tree into an intricate coat rack that now sits in the home of one of his daughters. Friends and strangers alike would bring their guns to him for a custom carved stock. He also collected pocket knives and would gift them to his family, but not without making a beautiful box to store it in. He and Martha had a great system when it came to gifting pocket knives. He would build and decorate the box while she would line it with the best felt she could find. Ray would engrave the bottom of each box with “RBMB”. Though he probably enjoyed drawing most of his life, he took to it much more once his hands began giving him trouble with his woodworking. Martha Kate Ellis Blythe was born in Lee County on January 17, 1933 to Bill and LouElla Stoval Ellis. She was valedictorian of her graduating class at Plantersville High School, and she was somewhat of a basketball enthusiast. Not only did she play it in high school, she and Ray would often watch college and NBA games together. The family joked about that being one of the only times her blood pressure got really high. She worked several years with Bellsouth Telephone Company, a number of years as a secretary at Verona School, and always took great care of her home and family. Like her husband, Martha was also extremely artistic and was without doubt an exceptionally talented seamstress which really worked out having three girls. Any formal dance the girls would attend, she would don them in a one of a kind gown, tailored specifically to them. She also made school clothes for the girls from time to time. She enjoyed crocheting, working crossword puzzles, and was an avid reader. Ray and Martha were long-time faithful members of Verona United Methodist Church where Martha taught 1st and 2nd grade Sunday School with Mrs. Doris Shumpert. She later was a member of the quilting club, Doras Circle, and served as secretary/treasurer of the Challengers Sunday School Class for many years. Ray helped with the upkeep of the church grounds with the other men of the church. Survivors include their three daughters, Sandy Ketchum of Tupelo, Lynne Bratton of Tupelo and Buggy Crutcher and her husband, Steve of Rogers, Arkansas; five granddaughters, to thom they were lovingly known as Memaw and Poppa, Jennifer Grana and her husband, Dave of Carrboro, North Carolina, Mallory Davidson of Tupelo, Maggie Neal and her husband, David of Morton, Hannah Crutcher and Sally Crutcher both of Rogers; three great-grandsons, Cameron Neal, Colton Neal and Alex Grana; many nieces and nephews; and Martha's brother, John Ellis of Tupelo, who often referred to Martha as "Boo". They were preceded in death by their parents; grandson, Ben Bratton; Martha's sisters, Billie Stanley, Jean Helms, Ann Drake and Sue Thompson; Martha's brother, Jimmy Ellis; Ray’s sisters, Nell White and May Harlow; and Ray’s brother, Rex Blythe. There will be a graveside service honoring their life and love, 1 p.m. Sunday, November 15, 2020 in Lee Memorial Park with Bro. Jeremy Funderburk officiating. They will then be laid to rest side by side for eternity. W.E. Pegues Funeral Directors is in charge of the arrangements. Pallbearers will be David Neal, Sam Davidson, Steve Crutcher, Mitch Carruth, Moses Ruff and Mike Ellis. Honorary pallbearers will be Dave Grana, James “Boy” Drake, Joe Thompson, Clifton Hodges, Sam Blythe, Tommy Carruth, Junior Scott, Dave Harris, Rick Helms, Todd Ellis, Timothy Ellis, Doug Stanley, and Joey Stanley. Memorials may be made to St. Jude Children's Research Hospital, PO Box 50, Memphis, TN 38101 or Verona United Methodist Church, PO Box 370, Verona ,MS 38879. Expressions of sympathy may be left at www.peguesfuneralhome.com.

Verona- Ray and Martha Ellis Blythe shared the kind of love you thought only existed in movies. On June 24, 1955, they vowed to love and cherish each other &#8220;in sickness and in health, &#8216;til death do us part&#8221; but neither sickness... View Obituary & Service Information

The family of Ray Blythe created this Life Tributes page to make it easy to share your memories.

Verona- Ray and Martha Ellis Blythe shared the kind of love you...

Send flowers to the Blythe family.