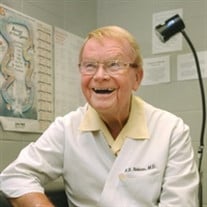 R. B. “RUD” ROBISON   Tupelo - Dr. R. B. “Rud” Robison beloved by family, friends, colleagues and patients has passed away peacefully at his home on Friday, September 15, 2017.   Considered an icon of old school medicine, he was a pillar of strength, compassion, wisdom and unconditional love to all who knew him. But it will be those two words – unconditional love that encapsulate him most accurately.    Born in Tremont, Mississippi, March 20, 1929, Rudyard Beal Robison was the first of five children born to Raymond and Sula Robison, raised on Forest Lake Dairy Farm (now Ballard Park) in Tupelo. He attended Tupelo High School, graduated with honors, studied premed at Mississippi State University, attended medical school at University of Mississippi, earned his Doctorate of Medicine with University of Tennessee and served a tenure in the United States Army Medical Corps at Fort Benning, Georgia.   One of his fondest memories of medical training was spending several days with William Faulkner as his physician before the author flew to Stockholm to collect his Nobel Prize in Literature.   During his training with the Medical Corps he had an opportunity to study under a direct trainee of Dr. Sterling Bunnell, who wrote the authoritative text on hand surgery. After that two-year rotation, the Colonel and Chief of Orthopedics, commended him on his surgical aptitude and skills and encouraged him to stay on as an Orthopedic Surgeon.  As promising as the proposition was, he declined and returned to rural Mississippi to fulfill his obligation for an earlier grant he received for college.  With that, he returned to Saltillo, Mississippi where he would spend the next 53 years of his life as a “simple country doc”.  While this is how he referred to himself, he was anything but.    He said, “It was a blessing being a country doctor, which is what I always called myself. I felt like I had a level of relationship with my patients that I wouldn’t have had with Orthopedics. I think I was not only their physician, but their friend. Something I wouldn’t have been able to do if I had specialized.”   The Saltillo Clinic opened on January 1, 1958 with an office fee of $4 and no employees, but 20 patients were seen that first day. From that day forward, the simple country doc, opened his doors without discrimination and provided medical services regardless of one’s ability to pay. He fondly recalled being reimbursed for medical procedures more than a few times with a half a dozen eggs or a bushel of beans.   To many of his patients and colleagues he was considered one of the best diagnosticians they had ever met. To him he was simply being their friend and listening to what they said and applying that to his medical knowledge.  He embodied his favorite quote by President Eisenhower’s Cardiologist:  “If you listen to the patient, long enough and hard enough – they will tell you what is wrong with them.”   Regardless of the person or diagnosis, whether a kitchen table birthing, a life-saving procedure or bruised knee, his patients were met with respect and graciousness until he retired at age 82. When asked why he didn’t retire earlier, he said he simply didn’t want to let his patients down.    Outside of his practice, life revolved around his family, friends, business successes, farming and golf. Family was of utmost importance and he was unwavering in his devotion, love and support of them.    He was a former Chief of Staff for North Mississippi Medical Center.   He was an avid farmer and so passionate about it he actually had a bumper sticker on his car which read, “Proud To Be A Farmer”.   One of his prized business adventures included the residential development of the “Old Payne Place” on land he acquired from his father and had farmed for many years.   But he would laughingly say one of his biggest achievements was putting six children through school and college on$10 a visit office fees.   He discovered golf in his late thirties and reveled that his first best score resulted in winning the club championship after three sudden death playoffs. He served as President of the Natchez Trace Golf club for several years and enjoyed some of his favorite memories with his wife Nancy, traveling and golfing around the world. On many occasions during those travels he was mistaken for golf legend Jack Nicholas, who he himself did a double-take once when seeing his doppelganger across a putting green.    When asked once if he had any regrets, he said very few, but those he had were about not being there for others. Yet there was nothing he wouldn’t do for anyone and gave his life to helping others.   Dr. R.B. Robison, a man of honor, integrity and unconditional love made an indelible impression on the lives of those he touched and will be forever cherished.   Visitation will be from 4 until 7 p.m. Friday, September 22, 2017 at W. E. Pegues, Tupelo.   Memorial services will be 3 p.m. Saturday, September 23, 2017, at the Jefferson Street Chapel of W. E. Pegues with Rev. Tim Green and Rev. Jay Stanley officiating and Dr. David H. Irwin, Jr. providing the eulogy.   He was preceded in death by his parents, Raymond and Sula Robison; brothers, Charlie Robison, DeCy Robison, Sid Robison and daughter, Angela White. Survivors include his wife of 42 years, Nancy Robison of Tupelo; children, Rud Robison, Jr. (Debra) of Tupelo, Raymond Andrew “Andy” Robison of Tupelo, Stacy R. Price (Dr. Mark) of Napa, California, Kim R. Mitchell (Tom) of Memphis, Tenn. and Wendy R. Morrow (Greg) of Saltillo; sister, Anne Robison of San Romon, California; grandchildren, Chelsea Zwick (Kevin), Claire R. Garnett (Josh), Madison Lannom, Emily Morrow, Samantha Powell, Sydney White, Tyler Lannom and Katherine Mansel (Jalon) and great-grandchildren, Emory Claire Garnett, Kane Powell and Ada Zwick; son-in-law, Nathan White (Leslie).   Memorial contributions may be made to the City of Saltillo - Robison Resource Center, City of Saltillo, P.O. Box 1426, Saltillo, MS 38866 or Sanctuary Hospice, PO Box 2177, Tupelo, MS 38803.   Expressions of sympathy may be left at www.peguesfuneralhome.com.

The family of Dr. R.B. "Rud" Robison created this Life Tributes page to make it easy to share your memories.

Send flowers to the Robison family.