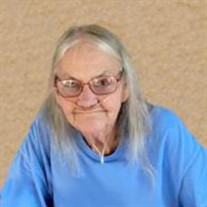 Peggy Herring Edgeworth Mantachie- Peggy Ann Herring Edgeworth, 68, died Thursday, September 30, 2021, at her home. She was born July 5, 1953, in Mantachie to William Erskin Herring and Louella Newcomb Herring. In 1971, she married Tommy Edgeworth, they were married for 39 years before his death in 2010. She spent the majority of her professional career as a seamstress in garment manufacturing. She was an avid fisherman who appreciated spending her time outdoors. In her later years, she became fond of traveling to the mountains. She enjoyed watching Days of our Lives, Young and the Restless, Law and Order SVU and Alabama Football. Peggy loved her family and adored her grandchildren and great-grandchildren. Peggy leaves behind her beloved family including three children, Louann Edgeworth of New Albany, David Ray Edgeworth and his wife, Rachel, of Vernon, Alabama, and Daniel Edgeworth, Sr. and his wife, Amy, of Hodges, Alabama; four grandchildren, Phillip Glasco of Vernon, Brittany Ann Marie Edgeworth of Sheffield, Alabama, Daniel Edgeworth, Jr. of Hamilton, Alabama, and Ketelynn Webber and her husband, Levi, of Iuka; two great-grandchildren, Reagan Edgeworth and Trey Edgeworth; two sisters, Geraldine Parker and her husband, Durell, of Mantachie, and Linda Franks and her husband, Richard, of Mantachie; special cousins, Jack Raper and Danny Raper; special niece, Rhonda Franks of Mantachie; and numerous other nieces and nephews. She was preceded in death by her parents; husband; son, Jason Edgeworth; and two sisters, Janice Franks and Glenda Tackett. Visitation will be 4 until 8 p.m. Saturday, October 2, 2021, at W. E. Pegues, Tupelo. Services honoring Peggy’s life will be 2 p.m. Monday, October 4, 2021, at the Jefferson Street Chapel of W. E. Pegues, Tupelo with Pastor Sharon Brown and Peggy’s grandson-in-law, Levi Webber officiating. Graveside services will follow at Center Star in Mantachie. The service will be live-streamed and recorded for those who may not be able to attend at www.peguesfuneralhome.com. Pallbearers will be Ricky Franks, Robert Franks, Sammy Parker, Tim Parker, Joel Parker, and Matthew Tackett. Expressions of sympathy and fond memories may be left at www.peguesfuneralhome.com.

The family of Peggy Herring Edgeworth created this Life Tributes page to make it easy to share your memories.

Send flowers to the Edgeworth family.