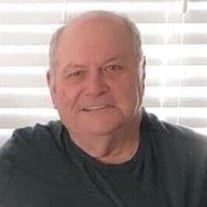 Paul W. Smith departed his earthly home on September 21, 2020 to find peace and rest at the feet of his Savior Jesus Christ. Paul was born to L. S. and Edith Smith on June 28, 1952. Paul had two loving siblings Hilda Franks (Harlan) of Saltillo, and Brother Melvin Smith (Gloria); a sister-in-law Wanda Gillentine (Bobby) of Nettleton and brother-in-law Larry Dunaway; nephews and nieces, Laura Bast (Bill), Lana Riley (Kevin) of Saltillo, Allen Richardson (Tonya) and Joseph Richardson (Crystal) of Nettleton. He spent his early years learning the values of hard work and determination on his parents’ dairy farm east of Saltillo. He carried that tremendous work ethic with him throughout life serving as Maintenance Supervisor at Leggett and Platt for 54 years. He valued his work but more importantly he valued his co-workers and leaves behind a work family that will miss him dearly including his “work daughter” Becky Walters (Roger). Paul’s dedication to his work was beyond impressive but paled in comparison to his dedication to his family. He married the love of his life Barbara Ann Dunaway on November 10, 1973. Together they raised four incredible children, Greg Buse (Teresa), Angela Haynes (Mike), Stanley Smith (Dee Dee) and Brian Smith (Erin). He was a kind and compassionate father who also had the ability to speak truths to teach his children the hard lessons of this world. They all are stronger people today because of the way he helped them to navigate through life’s challenges. His pride and joy was his 14 grandchildren, nine great-grandchildren and one great-great-grandchild. They all will miss him very dearly. His neighbors and “bonus family” Phillip and Amanda Hall along with children Colby Hall (Katie), Hannah-Brooke Hall and Paxton Hall also held a very special place in his heart. Paul enjoyed piddling around on his farm in Plantersville and had a special interest in old tractors. His favorite hobby was dirt track racing where he loved to build motors and mentor several local drivers. He was many things to many different people but the common theme among them all is he was a “True Friend”. His service will be officiated by Brother Jim Manley and Brother Scott Witcher who both are dear friends of the family. He was preceded in death by parents, L. S. Smith and Edith Smith along with a brother, Melvin Smith and nephew, Sammy Dale Smith. His in-laws Leonard and Paulene Dunaway also proceeded in death. Pallbearers are Brantley Whitt, Phillip Hall, Tim Kizzire, Michael Dickerson, Jeff Burns and Sammy Washington. Honorary pallbearers are Keith Flurry, Kelly Woolven, Hershell Bennett, Johnny Conwill, Joe Minga, Marty Dickinson and Michael Dickinson. Visitation will be 12 until 2 p.m. Wednesday, November 25, 2020 at W. E. Pegues, in Tupelo. Funeral Services will be 2 p.m. Wednesday at the Jefferson Street Chapel. Burial will be at Jones Chapel Cemetery in Nettleton. Expressions of sympathy may be left at www.peguesfuneralhome.com.

The family of Paul W. Smith created this Life Tributes page to make it easy to share your memories.