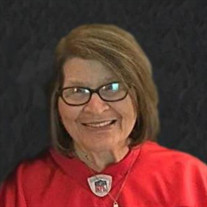 The beloved Roberts family matriarch, Patricia Lee Webb Roberts, died Wednesday, January 20, 2021 at her home surrounded by family at the age of 83. She was a Tupelo native, born on April 30, 1937 to William “Bill” Webb and Eva Williams Webb. In 1955, she graduated from Tupelo High School and in 1957 she married Gene Roberts, together they have five children. Pats was a dedicated mother who enjoyed spending time with her family. Pats was an avid sports fan; her favorite teams included the Mississippi State Bulldogs, Dallas Cowboys even long before Dak and it was an exciting day when he was drafted on her birthday! Longtime, faithful member of Orchard Church, Pats loved the Lord and demonstrated His love in everything she did. Her devotion to her church and the Lord was evident as all her children now love the Orchard as much as she did due to her persuasion. Even when in 2009 to be closer to her family she moved to Baldwyn she remained faithful to her church. She was an active member of multiple small groups over the years. Pats was a great judge of character, non judgmental and always found the bright side. Even while her health declined she continued to be optimistic and energetic. She is survived by her five adored children, Kim Roberts Huggins and her husband, Jimmy of Corinth, Bill Roberts, and his wife, Trish of Tupelo, Jason Roberts and his wife, Kathy of Tupelo, Merrie “May-May” Roberts Grayson and her husband, Terry of Tupelo and Tiffany Roberts Harmon and her husband, Chad of Baldwyn; nine grandchildren, Haley Moore of Corinth, Summer Roberts of Buffalo, New York; Laken Franks and her husband, Eric of Mantachie, Lynsey Vanstory, Webb Roberts, Tanner Grayson, Garrett Grayson, Merrie Kate Grayson and Brody Grayson all of Tupelo; and six great-grandchildren, Kathryn and Grey Moore, Easton Brock, Noah Franks, Lyla Cate and Cross Vanstory. She also leaves behind “her person”, the Thelma to her Louise, her dear friend, her sister Glenda Pams. Patsy was preceded in death by her parents, Bill and Eva Webb; husband, Gene Roberts, two brothers, Jimmy Webb, who died in WWII and Billy Webb; and one sister, Margaret Perry. Visitation will be from 1 p.m. until service time Friday, January 22, 2021 at W. E. Pegues, Tupelo. Services honoring her life will be 3 p.m. Friday, January 22, 2021 at the Jefferson Street Chapel of W. E. Pegues with Dr. Bryan Collier and Rev. Jay Stanley officiating. Graveside services will be at Tupelo Memorial Park. Pallbearers are Chad Harmon, Jimmy Huggins, Tanner Grayson, Garrett Grayson, Webb Roberts, Brody Grayson, and Ray Hopkins. Honorary pallbearers will be Terry Grayson and all the beloved members of the Orchard Church. Memorials may be made to Kare-In-Home Hospice, 909 S. Fulton Dr, Corinth, MS 38834 or the Orchard Church, PO Box 3216, Tupelo, MS 38803. Expressions of sympathy may be left at www.peguesfuneralhome.com.

The beloved Roberts family matriarch, Patricia Lee Webb Roberts, died Wednesday, January 20, 2021 at her home surrounded by family at the age of 83. She was a Tupelo native, born on April 30, 1937 to William &#8220;Bill&#8221; Webb and Eva Williams... View Obituary & Service Information

The family of Patsy "Pats" Roberts created this Life Tributes page to make it easy to share your memories.

Send flowers to the Roberts family.