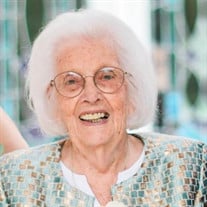 Tupelo—Patricia Ruth Weiland Hutson died Sunday, October 25, 2020 at the Sanctuary Hospice House. Born January 4, 1926 in Cedar Rapids Iowa to Dr. Arthur Herman Weiland and Ruth Elaine Clayton Weiland, the family moved to Coral Gables, Florida when she was four months old. Patsy grew up in Coral Gables and attended Miami High School and then Duke University where she majored in Sociology and was a Kappa Delta. During high school she met Thomas Woodward Hutson, Jr at the Biltmore pool. A medical student on break from the University of Florida, his parents were also part of the Miami medical community and their parents knew each other. On their first date Tom knew she was the one and she came home with his class ring which her mother promptly made her return. They were engaged a few years later and married in 1948 upon her graduation from Duke. Patsy and Tom had four children. Thomas W. Hutson, III (Lisa) of Concord, CA, Patricia Ruth Hutson of Oroville, CA, Arthur Weiland Hutson (Denise) of Anderson, SC and Mary Elizabeth Hutson Davidson (Todd) of Tupelo. They resided in Coral Gables surrounded by a large loving family of parents, sisters and brothers. Patsy served many charitable philanthropies including Junior Auxiliary, P.E.O. Sisterhood, DAR and was active in her children’s PTA. She was a registered Girl Scout for sixty years and served as a troop leader and in many other capacities for the Florida and North Carolina Scout districts. She enjoyed gardening, hunting, fishing, and especially golfing. They retired to Western North Carolina and spent their time curating an extensive garden at their home. She volunteered for the Girl Scouts and served as a Guardian ad Litem for the North Carolina court system. She enjoyed taking classes at the John Campbell Folk School located in Brasstown, NC. She was proficient at weaving, stained glass, basketry and other folk arts. By this time Patsy had many grandchildren (fourteen in all) and enjoyed their visits to the mountains. Patsy enjoyed whitewater rafting, train excursions and playing bingo with the grandchildren during these visits. She also participated in the North Carolina Senior Olympics in golf, where she advanced to the National Senior Olympics three times, once finishing fourth in her age group nationally. Patsy was a colon cancer survivor and at the age of 78 she and Tom left their beloved mountain home to move to Tupelo, Mississippi to be near their youngest daughter and grandchildren. She continued to play golf and Patsy and Tom were featured in the local paper for the landscaping and gardening improvements they made at their home in The Villages. Tom said she bought the plants and his job was to plant them. Three years ago, just shy of their 69th wedding anniversary Patsy lost Tom. She continued to live in their home with their beloved Yorkie, Yogi, and keep up their garden. She looked forward to visits from family and friends and a golf outing was always welcome. In the last six months age began to take its toll and Patsy went to live with her youngest daughter and son in law. She had a deep and abiding faith in God and she was very supportive of the Helping Hands food and clothing ministry at First United Methodist Church in Tupelo. A celebration of life service will be held at First United Methodist Church on Friday, October 30, 2020 at 3:00 pm. Limited visitation observing all COVID19 protocols will follow the service. Friends are kindly requested to adhere to the church’s instructions at the end of the service. The service will also be live streamed on First United Methodist Church's Facebook page. W.E. Pegues is entrusted with the arrangements. Patsy and Tom’s cremated remains will be interred at Stoney Creek Cemetery, Sheldon SC in the family plot in the spring. In lieu of flowers the family requests that memorials be sent to First United Methodist Church marked Helping Hands, Post Office Box 854, Tupelo, Miss. 38802; or to Sanctuary Hospice House, Post Office Box 2177, Tupelo, Miss. 38802. Expressions of sympathy may be left at www.peguesfuneralhome.com.

The family of Patricia Ruth Weiland Hutson created this Life Tributes page to make it easy to share your memories.

Send flowers to the Hutson family.