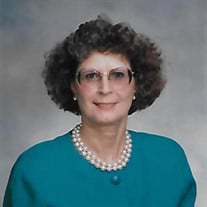 Tupelo--Patricia Wade Connell, age 86, passed away at home surrounded by loving family on Sunday, June 6 after a long struggle with Parkinson’s Disease. Pat was born on April 1, 1935 in Parkersburg, West Virginia, to Yancy Ewell and Mildred Cheatham Wade. When Pat was born, her maternal grandmother asked if she could name her first grandchild. After Mildred agreed to the request, a slip of paper came in the mail with the name “Patricia Rosetta”. During her school years, Pat excelled at math and English. She frequently was the winner of the yearly school spelling bee. This background gave Pat the reputation of being a gifted grammarian and editor. During high school, Pat began attending Camden Avenue Church of Christ with her beloved paternal aunt, Effie Wade Sprout. When Pat was 16 she made the decision to become a Christian. After graduating from Parkersburg High School, Pat worked for a year in the office of a local law firm before taking a Trailways bus to Henderson, Tennessee to attend Freed-Hardeman University. There she met and married Joe Lee Connell, a West Tennessee native from Sharon. In August, Pat and Joe would be celebrating their 66th wedding anniversary. Pat and Joe moved to Memphis shortly after marrying while he organized sales crews to sell books for the Nashville based Southwestern Publishing House, as well as working for Hyster Fork Lift Company. During their time in Memphis, Pat worked for Leader Federal Savings and Loans. Before their next move, Pat went with her husband to Anderson, South Carolina to accompany him while he sold books and Bibles. From Anderson, the couple moved to Nashville where Joe completed his college degree at David Lipscomb University and began working for American Founders Insurance. Pat’s first position in Nashville was the secretary for the president of Castner Knott Department Store. Later, Pat held the position as legal secretary and office manager for a Nashville attorney. It was in Nashville that Pat gave birth to their daughter. A year after the birth of their daughter, Pat and Joe moved to Johnstown, Pennsylvania, where her husband began his preaching ministry at the Richland Church of Christ. In Johnstown, Pat began her journey walking beside her husband as a minister’s wife for the next 63 years. It was in Johnstown where their son was born. After living in Johnstown for six years, Pat and her husband moved to Muncie, Indiana, where he worked for the Yorktown Church of Christ. She worked editing the Federal Government Title Three Program that studied Indiana high schools. While in Muncie, Pat also worked at Ball State University where she was the administrative assistant to the head of the Psychology Department, as well as supervising 20 student secretaries who worked for the department professors. From Muncie, they moved to Louisville, Kentucky for six years where her husband was the minister for the Middletown Church of Christ. In Louisville, Pat was the Office Administrator for a CPA. Eventually Pat obtained her real estate license selling homes and managing apartment complexes. In 1975, Pat and Joe moved to Tupelo where they worked with the Gloster Street Church of Christ for 25 years and the Sherman Church of Christ for 13 plus years. In Tupelo, Pat also worked 27 years for the Mississippi Employment Security (MS Job Service). When it came time for retirement, Pat and her husband enjoyed Tupelo, their church family, and friends so much that it has been home for the last 46 years. During all the years of taking on the role of a preacher’s wife and working outside her home, Pat devoted her life to rearing their daughter, son, and a granddaughter, and fostering a teenage girl. She actively served in the church which she loved so much in numerous ways, including teaching children’s and ladies’ Bible classes, organizing Ladies’ Day events, and helping with bridal and baby showers. Pat also enjoyed Bible study, spending time in her kitchen baking, decorating her home, watching old movies, and spending time with her family. Pat leaves her devoted husband, Joe Lee Connell and one brother, Michael Ewell Wade (Teresa) of Parkersburg, West, Virginia. To carry on Pat’s legacy are her children, Elizabeth Connell Daniel (Sam) and John Wade Connell (DeAnna). Grandchildren: Adrienne Daniel Pearce (Brantley), Tatum Connell Nowlin (Ty), Michael Keith Daniel (Emily), Erin Jane Connell, and Lawson Wade Connell. Great Grandchildren: Chandler Tripp Nowlin, Tyrus Cade Nowlin, Ryker Lee Nowlin, Lauren Rivers Nowlin, Ainsley Sue Pearce, Audrey Kate Pearce (deceased), and Amelia Kate Pearce. Visitation will occur on Saturday, June 12 from 11:00 a.m. until 1:00 p.m. at Gloster Street Church of Christ in Tupelo with services to follow at 1:00 p.m. The service will be conducted by Clay Foster and Chad Ramsey. Graveside service and burial will be conducted by Al Price on the following day at 3:00 p.m. at Tansil Cemetery in Sharon, Tennessee. W.E. Pegues Funeral Directors is entrusted with the arrangements. The services will be livestreamed at www.glosterstreetchurch.com. Expressions of sympathy and found memories may be left at www.peguesfuneralhome.com.

Tupelo--Patricia Wade Connell, age 86, passed away at home surrounded by loving family on Sunday, June 6 after a long struggle with Parkinson&#8217;s Disease. Pat was born on April 1, 1935 in Parkersburg, West Virginia, to Yancy Ewell and Mildred... View Obituary & Service Information

The family of Pat Connell created this Life Tributes page to make it easy to share your memories.

Send flowers to the Connell family.