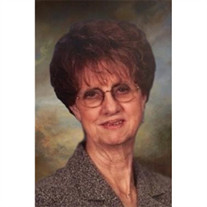 MYZETTE ROBERTS Tupelo - Lillian Myzette Wilder Roberts, 81, died Friday, July 1, 2016 at North Mississippi Medical Center Hospice. She was born Oct. 17, 1934, in Pontotoc County to Mary Estelle Clayton Wilder and John Frederick Wilder. Roberts graduated from Ecru High School in 1953 and holds an associate's degree from Itawamba Community College. She earned a bachelor's degree in home economics from Mississippi University for Women in 1957.  She married Harold Roberts on Dec. 22, 1957. She taught at Hurricane High School, Mantachie High School and Mooreville High School. She completed her master's degree in home economics from the University of Mississippi in 1963. The Robertses moved to Tupelo in 1963 and still reside in the home they built that year. They soon joined West Jackson Street Baptist Church, and she remained active until her health declined. While their children were young, she was a stay-at-home mother and bookkeeper for J&H Garage, which her husband and his brother founded in 1967. She kept books for the garage until her husband retired and it closed in 2003. When her children were older, she also worked as a secretary for Lawndale Presbyterian Church, North Mississippi Management (Lee Memorial Park) and St. Mark United Methodist Church. She returned to the University of Mississippi and earned a master's degree in guidance counseling, then worked for Tupelo Public School District for many years. She later joined the Salvation Army's after-school tutoring program and enjoyed helping students there until the program closed. She was a former member of the Mississippi Antique Car Club and the Northeast Mississippi Art Association. She enjoyed volunteering at North Mississippi Medical Center for many years. She was passionate about flower gardening, especially roses, and cooking, especially anything chocolate. She is survived by her husband of more than 58 years, Harold Roberts of Tupelo; daughter, Deborah Roberts Pugh (Larry) of Tupelo; son, Todd Roberts of Sardis; grandchildren, Lauren and Courtney Pugh of Tupelo; brother, Dewitt Wilder (Janie) of New Albany; and a host of nieces and nephews. In addition to her parents, she was preceded in death by siblings Doris Newsum (Bob), Pauline Dowdy (Raymond), James Robert Wilder (Lois), Frances Armstrong (Dean), and infant twin sisters, Bessie Mae and Ola Fay Wilder. Services will be held at 2 p.m. Saturday, July 2, 2016 at W. E. Pegues Funeral Home with the Rev. Frank Wilder officiating. Visitation will be from noon until service time. Burial will be in Ecru Cemetery. Pallbearers will be her nephews. In lieu of flowers, the family requests donations to NMMC Hospice or a charity of the donor's choice. Expressions of Sympathy may be left at www.peguesfuneralhome.com.

The family of Myzette Roberts created this Life Tributes page to make it easy to share your memories.

Send flowers to the Roberts family.