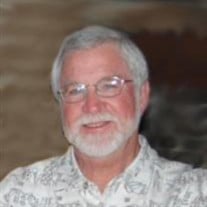 Tupelo-- In the same way he lived his life, Michael Ruff Thomas, 73, passed away at his home Saturday, May 14, 2022 with great dignity, little fanfare, and surrounded by those he loved most. A pioneer in the furniture industry, and more specifically in the development of promotional furniture, Mike and his business partner and lifelong friend, Jim Wiygul, established Independent Furniture Supply in 1979. As a team they grew the business into one of the largest and most reputable foam companies in the nation. Mike credited much of his success to the loyal and dedicated office staff and employees on the manufacturing floor. A graduate of Tupelo High School, Mike attended Tulane University in New Orleans, and received his MBA in accounting from Mississippi State University. Although the business demanded much of his time, especially in the early years, Mike took to heart Luke 12:48 - To whom much is given, much will be required. He rarely refused his sons’ requests to practice baseball, and for years served as their teams’ coach. He also attended all his daughter’s dance recitals and, when needed, willingly served his church. A life-long member of First Presbyterian Church, he sang baritone in the chancel choir over several decades, was a ruling elder, and more recently chaired the administration committee. In addition, he invested much time and effort into Big Oaks Farm, LLC, developing residential and commercial properties. During his youth, Mike was proud to earn the rank of Eagle Scout, the highest advancement in Scouting, and he was equally proud when both his sons achieved the same honor. For years, he and his siblings enjoyed competing in Tennessee Walking Horse competitions throughout the region. A man of few words, Mike had to be dragged, kicking and screaming, to most social gatherings, unapologetically leaving as early as permitted. There were, however, three places Mike loved to linger – anywhere with family, overlooking Pickwick Lake at sunset, and at his beloved duck camp with his son Field and best friend, Jim, with whom Mike shared his love of the outdoors. When his health began failing, Mike prayed for one last duck season. Thankfully his prayer was answered. His children are most grateful for Mike’s unconditional love and calm countenance. However, there were moments his demeanor quickly shifted to anger - when someone drank the last Mountain Dew, ate any of his chocolate chip cookies, or failed to replace an empty bottle of ketchup. His six grandchildren, who lovingly called him “MyMike” are left with fond memories of summer days at Pickwick and learning to steer the boat from the coveted Captain’s seat. Preceding him in death are his parents, Dr. and Mrs. PK Thomas, Jr., and brother, Perry King Thomas, III. Mike is survived by his wife of 44 years, Daintry Richmond Thomas of Tupelo, and his children, Ruff (Angelia); Field (Amy); and Natalie Ellis (Bryan), and his six grandchildren – Anne Bailey, Emerson, Gia, Chris, Bryan and Cam, all of Tupelo. He also is survived by his siblings, Kathryn Ann “KK” McNally (Gary) of Brentwood, Tennessee; and Dr. Glenn Thomas (Mary) of Tupelo; sisters-in-law Judy Thomas, Jill Jacobs (Bill), and Trica Bramlett (Chandler); brothers-in-law Basil Richmond III (Terry) and John Richmond (Jill), and a host of nieces, nephews and cousins. The family would like to extend special thanks to Mike’s nurse, Alayna Harris. Services honoring Mike’s life will be 12 p.m. Wednesday, May 18, 2022 at First Presbyterian Church in Tupelo, followed by a private inurnment at the church columbarium. Visitation will be from 10 a.m. until service time. W. E. Pegues Funeral Directors is in charge of the arrangements. In lieu of flowers, donations may be made to First Presbyterian Church’s Columbarium Fund, 400 West Jefferson St., Tupelo, MS 38804, Sanctuary Hospice House, PO Box 2177, Tupelo, MS, 38803, or the Tupelo Lee Humane Society, P. O. Box 2143, Tupelo, MS 38803 Expressions of sympathy and fond memories may be made at www.peguesfuneralhome.com.

Tupelo-- In the same way he lived his life, Michael Ruff Thomas, 73, passed away at his home Saturday, May 14, 2022 with great dignity, little fanfare, and surrounded by those he loved most. A pioneer in the furniture industry, and more specifically... View Obituary & Service Information

The family of Mike Thomas created this Life Tributes page to make it easy to share your memories.

Tupelo-- In the same way he lived his life, Michael Ruff Thomas,...

Send flowers to the Thomas family.