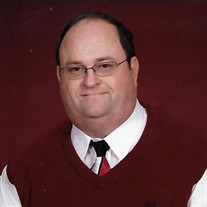 Mike Griffin Tupelo- Robert Mike Griffin, 63, died Sunday, February 21, 2021 at Tupelo Nursing and Rehabilitation. Mike was born February 20, 1958 in Tupelo. He is the son of Robert Edward Griffin and Shirley Jane Turner Griffin. Mike was a gifted musician and vocalist. He was a devoted member of the quartet, Foyer Boyz. He was employed by the Tupelo Public School District for over 30 years. During this time of employment he was Director of Transportation, Director of Custodial Services, and Director of Warehousing. He was a longtime and faithful member of Lee Acres Church of Christ. Before his father’s death in 1991, they maintain the yard for years. He also was a rotating song leader for the church. Mike leaves behind his mother, Jane Griffin of Tupelo; one uncle; several aunts; and numerous cousins. He is preceded in death by his father, Bobby Griffin. Visitation will be 1 p.m. until service time Wednesday, February 24, 2021 at W. E. Pegues, Tupelo. A service honoring his life will be 2 p.m. Wednesday, February 24, 2021 at the Jefferson Street Chapel of W. E. Pegues with Ministers Jerry Grammer, Dale Carr, and Stephen Shaffer. Burial will follow in Tupelo Memorial Park. Pallbearers will be Terry Turner, Woody Turner, Thomas Bonds, Eddie Carnathan, Brent Roberson, and Tony Turner. Honorary pallbearers will be Deacons and Elders at Lee Acres Church of Christ. The service will be live streamed and recorded for those who may not be able to attend at www.peguesfuneralhome.com. Expressions of sympathy and fond memories may be left at www.peguesfuneralhome.com.

The family of Mike Griffin created this Life Tributes page to make it easy to share your memories.

Send flowers to the Griffin family.