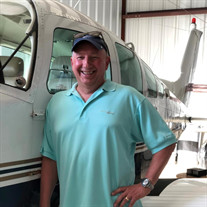 Mike Earrey Columbus- Michael A. Earrey, 60, died Friday, January 8, 2021, in Troy, Alabama. Mike was born October 1, 1960, to Ralph and Maria Lexis Earrey in Tupelo. He graduated from Shannon High School and went on to earn his Bachelor’s in Professional Accountancy from the Mississippi State University. He was a practicing accountant for over 30 years after receiving his CPA, and he currently held the position of Chief Financial Officer at HB&G Building Products in Troy. On May 6, 1995, he married the former Judy Ivey and together they have two daughters, Mary Lexis and Anna Russell. Starting at an early age, flying was one of Mike’s greatest passions in life. He was a talented pilot with his private, commercial, and instructor licenses. Mike was a member of Brewer Baptist Church and attended First Baptist Church in Columbus. Mike was a good man who was always willing to help others. While he was a hard working man who enjoyed his hobby, he most loved spending time with his wife, daughters and beloved dogs, Blackie, Angelina, and Henry. Survivors include his wife of 25 years, Judy Ivey Earrey of Columbus; his pride and joy, his daughters Mary Lexis and Anna Russell Earrey both of Columbus; and sister, Cindy Earrey of Kalispell, Montana. He was preceded in death by his parents; sister, Elizabeth Earrey; and brothers, Peter Joe Earrey and Wayne Earrey. Graveside services will be 1 p.m. Monday, January 11, 2021 at Brewer Cemetery with Dr. Shawn Parker officiating and his cousin, Bill Benson providing special music. W. E. Pegues Funeral Directors is in charge of the arrangements. Honorary pallbearers will be the members of EAA chapter # 1189, pilots of the Monroe County Airport, and his many friends, including Chuck Poindexter, Andy Robison, Willie Kelly, Ed Dubose, Curry Justice, Andy Kelly, Bob Eckert, Alex Garcia Jr., Sreemukh Sanne, and Dr. Cecil Boswell. Memorials may be made to St. Jude Children’s Research Hospital, PO Box 50, Memphis, TN 38101, MSU Animal Health Center, 240 Wise Center Dr., Mississippi State, MS 39762, and Free Will Baptist Children’s Home, PO Box 8, Eldridge, AL 35555. Expressions of sympathy may be left at www.peguesfuneralhome.com.

The family of Mike Earrey created this Life Tributes page to make it easy to share your memories.

Send flowers to the Earrey family.