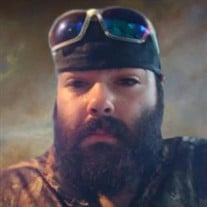 Blue Springs- Micah Dobbs, 27, died Sunday, December 13, 2020 at North Mississippi Medical Center after brief illness. He was born in New Albany, April 10, 1993 to Johnny Ray Dobbs and Kimberly Rose Hamblin. Self employed for most of his working life, he had mastered many trades. He enjoyed being outdoors, especially hunting wildlife and arrowheads. Micah had a heart of gold and would give anyone the shirt off his back if they were in need. He loved his family and friends. Micah received Christ as his savior two years ago and had spoken in recent days of the strength of his faith. Survivors include his mother, Kim Guthrie and her husband, Red, of Blue Springs; father, Johnny Ray Dobbs and his wife, Teri, of Tupelo; daughter Elsa Dobbs; paternal grandmother, Annette Dobbs of Tupelo; maternal grandparents, Danny and Faye Hamblin of Blue Springs and Julia Hamblin of Okolona; two brothers, Danny Dobbs and William Dobbs; step-sister, Mandi Guthrie; and his fiancé, Kristin Snider and her son, Maddox of Blue Springs. He was preceded in death by his grandfather, Billy Ray Dobbs; great-grandparents; and two cousins, John Michael Foreman and Terry Jo Hamblin. Visitation will be 4 until 8 p.m. Tuesday, December 15, 2020 at W.E. Pegues, Tupelo. Services honoring his life will be 12:30 p.m. Wednesday, December 15, 2020 with Pastor David Ball officiating. Burial will be in Stephens Cemetery. Pallbearers will be Danny Dobbs, Trent Hamblin, Andrew Hamblin, Daniel Craig, Walker Jones and Jason Clay. John Michael Foreman, Micah’s cousin and best friend, will be his sole honorary pallbearer. The service will live streamed and recorded for those who may not be able to attend at www.peguesfuneralhome.com. Memorials may be made to St. Jude Children's Research Hospital, P.O. Box 50, Memphis, TN 38101 or Transformation Ranch, P.O. Box 4083 Tupelo, MS 38803. Expressions of sympathy may be left at www.peguesfuneralhome.com.

The family of Micah Dobbs created this Life Tributes page to make it easy to share your memories.

Send flowers to the Dobbs family.