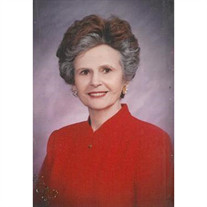 MAXINE D. MOORE Tupelo - Maxine D. Moore, 80, died SundayMay 22, 2016, at her residence in Tupelo after a lengthy illness. A native of Wayne County, she was born August 2, 1935, to Earnest Annual Dunn and Mattie Louise Henderson Dunn. She was raised in Wayne County and was a 1954 graduate of Clara High School where she was voted "Class Favorite". She attended Clark Memorial College in Newton in 1954 and 1955, received her bachelor of arts in education from William Carey College in 1957, taught in elementary schools in Mississippi, Florida, and Louisiana, and in 1963 obtained her masters degree in elementary education from the University of Southern Mississippi. In 1964, Maxine married Dr. Jerry Pascal Moore from Newton and from 1964-1969 Taught school in New Orleans, while her husband completed his residency at Tulane University and Charity Hospital of Louisiana. After 1969, Maxine taught school only occasionally by short-term substitute teaching in private schools. She loved her husband and children abundantly supplementing all three of her children's education in their private Christian schooling. Along with her husband, Jerry, Maxine enjoyed traveling having together visited all 50 states and much of Canada. She was only lukewarmly fond of camping, although when the family resided in Texas for several years, she grew to appreciate frequent trips in the "Wild West". Foreign travel included long trips to the British Isles, Ireland, Greece, Rome, Cairo, and Israel. In 1995 She and Jerry were privileged to go with Ken Ham, founder and builder of Kentucky's Creation Museums on his unique tour experience on Australia. In the 1980's, Maxine worked part of the time in Dr. Moore's private medical practice in Philadelphia. While living in Philadelphia, Maxine greatly enjoyed that city's Futura Club activities. Church activities were always a primary interest for both Maxine and Jerry. During their eleven years tenure in Jackson, they often jointly taught Sunday school. She consistently supported Jerry in his quite conservative religious views and remained a member of the Gideons Auxiliary. In 2002, Maxine and Jerry moved to Tupelo when he retired from full-time medical practice. Since 1991 Maxine had health issues including rheumatoid arthritis but early and rigorous treatment helped her avoid the disease's most severe crippling effects. Since 2002 Maxine was a member of First Baptist Church in Tupelo and for several years greatly enjoyed her Sunday School Class. Maxine always loved to wear hats. Being tall, poised and beautiful, she often wore stylish hats, especially to church services. She was affectionately known as "the hat lady." She made a hobby of collecting hats and took great care of all those she had. During her honeymoon in New York City, Maxine saw and tried on a dress hat that she had fallen for at Macy's and the only thing she and her new husband could afford at the time, was a picture of her and the hat.Thirty-fife years later, on their anniversary, she received from Jerry as a gift a hat as nearly like the one she first saw in the window at Macy's. She longed to have her grandchildren nearly (so she could spoil them). However, all five lived many hours distance in states far from home. Services honoring her life will be 11 a.m. Wednesday at First Baptist Church in Tupelo with Rev. Rickey Young and Rev. Matt Powell officiating. Graveside services will be 4 p.m. Wednesday at East Lawn Cemetery near Philadelphia. W. E. Pegues Funeral Directors is in charge of the arrangements. She is survived by her loving husband of 51 years, Dr. Jerry Pascal Moore, M.D.; three children, Stacy Kyle Moore (Nylea Butler-Moore) of Los Alamos, New Mexico, Jan Linette Moore Wardlaw (Van) of Chattanooga, Tennessee, and Shelly Louise Moore McKasty (Chris) of Charleston, South Carolina; five grandchildren, Erin Chapman Kimberlin, Hart Wardlaw Berry, Haley Butler-Moore, Nicholas McKasty, and Christina McKasty; one great grandchild, Campbell Berry. Visitation will be Tuesday, May 24, 2016, from 5 to 8 p.m. at the W. E. Pegues. Memorials may be made to Gideons International, P. O. box 140800, Nashville, TN 37214 or to Answers in Genesis, P. O. Box 510, Hebron, KY 41048 Expressions of sympathy may be left at www.peguesfuneralhome.com

The family of Maxine D. Moore created this Life Tributes page to make it easy to share your memories.

Send flowers to the Moore family.