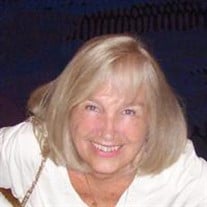 MARY LAND Montgomery, Texas- Mary Eleanor (Davis) Land, age 78, died July 6th, 2017, in Tupelo, MS. The cause of death was a stroke. Born October 23, 1938 in Houston, TX, she lived in California and Nevada, before settling in Montgomery, TX with her husband Dr. Robert Land. Mary graduated from Louisville High School in Louisville, MS, in 1956, and attended Mississippi State University. In college, she was a MSU majorette, was honored on the homecoming court, and was selected as a Beauty in the 1958 Reveille. Her beauty was inside and out, and she was loved dearly by her husband and family. Mary was a flight attendant for Braniff Airways and over the course of her life worked for five major airlines. She also worked as the manager of the press room for the Apollo missions at NASA Johnson Space Center in Houston, TX and later handled press releases as a member of Senator John Tower’s staff in Washington D.C. In 2005, she retired from Alaska Airlines. Mary was a beloved wife and cherished mother. She lived life to the fullest and was an avid traveler, a film buff, and a lover of all music. She will be especially remembered for her good Christian heart, her kindness and generosity to others and animals, her quick wit, and her spirit of adventure. Preceeded in death by her dear mother, Viola (Miller) Turnipseed. Survivors include her husband, Dr. Robert Land; her sister, Janette Thaxton; her children, Michelle and Mike Deal, Col. (retired) Thomas Miller, Dirk and Mindy Miller. The family requests that memorial donations be made to St. Jude Hospital, Mississippi State University, or a charity of choice, in loving memory of Mary Eleanor Land.

The family of Mary Land created this Life Tributes page to make it easy to share your memories.

Send flowers to the Land family.